Music Track - Play when it shows up if you want to listen. 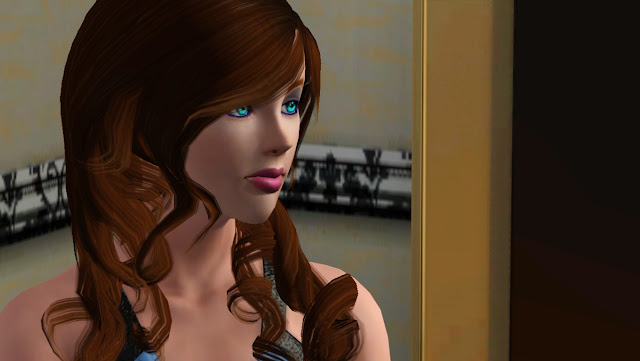 Did the Compound ever find out that you didn't have any interest in being intimate with a woman? 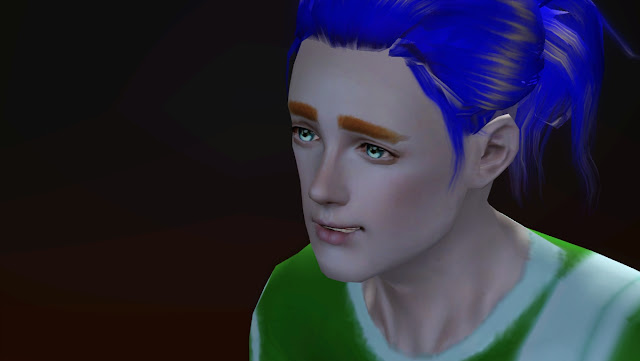 Well... that's a hard question to answer. I was sexually assaulted by someone whom I'd least expected to be breaking the rules. To this day, I can't explain why he did it. The aftermath of that experience led to the misinterpretation of a situation that was completely innocent and was blown entirely out of proportion. They never actually asked me flat out if I preferred men over women, but I'm fairly certain that after this situation, they just assumed that I did.

Camo comes back to his and Titanium's room and sees Titanium sitting on the floor crying. He makes his way over to Titanium and stays close to him.

"Titanium? It's Camo. What's the matter?" 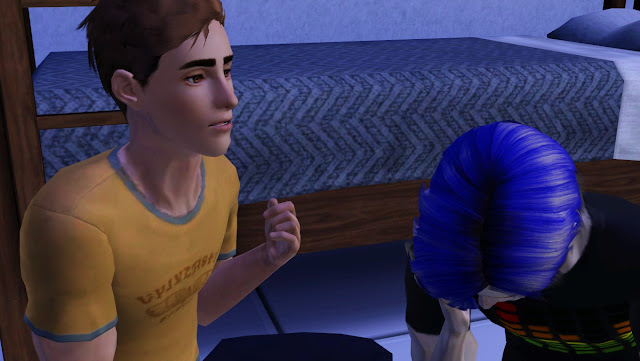 Camo is confused, but he fulfills Titanium's wish and hugs him. Titanium cries into Camo's shoulder, his tears soaking into Camo's tshirt. Camo is really concerned about him because he's never seen him this sad before. Camo knows nothing bad happened between he and Absolon because he knows that the last time Titanium saw Absolon was when Camo brought them to Verona's house after they got back from Egypt. Titanium seemed fine after that visit.

"Camo, it was awful. Barry made me have sex with him."

"What the fuck? Did you tell anyone? You know how we're not supposed to have sex anywhere else but the Intimacy Room, he'd get in trouble for it."

"Yeah, but what about me? I feel like I'd get in trouble too because that's just how messed up this place is. It doesn't matter if I am right or not, the fact that I was involved in it automatically means I get in trouble too."

Camo looks down sadly at Titanium and knows he's right. There's no reasoning with The Leader and it is the norm here for both parties breaking the rules to be thrown into Isolation. He's angry because Barry is going to get away with it. Suddenly he has an idea. 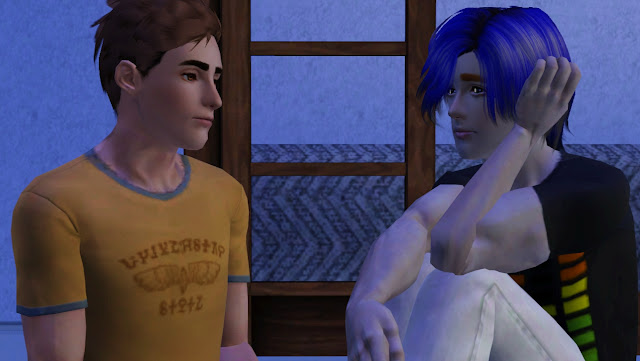 "Titanium, what if I told The Leader that it happened to me? Barry would get what he deserved, and you'd get some sense of justice."

"No, I don't want you to have to go in Isolation. It's horrible, Camo! They feed you once a day for a week. You have to sleep on the floor with a single thin blanket. I don't want you to do that! I care about you too much. You could die! Don't! I don't want to lose you! Justice isn't that important if I lose you in the process."

Titanium freaks out and grabs Camo's shirt in a desperate plea to get him to release that idea from his mind. He hugs him tighter and cries harder.

"Shh, it's okay, I won't. I just thought I'd see how important it was to you that Barry get in trouble, but it's clear to me that my well being is more important to you, so I won't do it. It's okay."

Meanwhile... Barry walks past Titanium and Camo's door and sees them in an embrace. Barry grins to himself and pulls out his walkie talkie. A few minutes later, Camo's walkie talkie goes off and The Leader's voice comes over it. 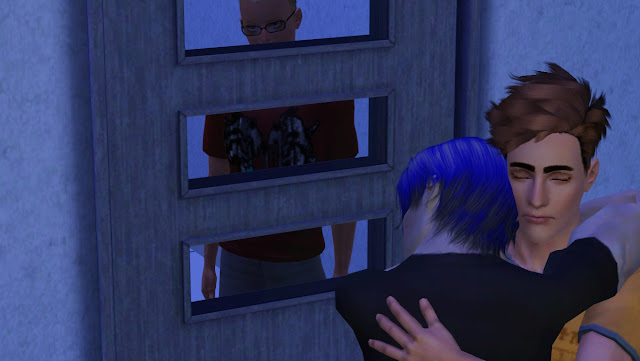 "Camo and Titanium, please come to the Announcement Desk."

Camo hands Titanium a tissue so he can clean his tears off his face, and changes into a dry shirt. He looks at Titanium to make sure he's composed enough to leave their room. It probably won't be good for The Leader to see him crying. They make their way over to the Announcement Desk and are greeted with the clipboard that holds the papers for Isolation. Titanium grabs the back of Camo's shirt, and Camo gets annoyed with The Leader.

"What the hell? We didn't do anything." 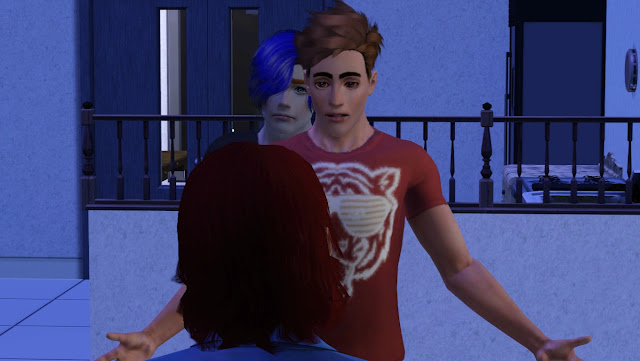 "Contrary to popular opinion, Camo, you did. Someone saw you and Titanium hugging each other in what looked to be an extremely intimate way. That's a big no-no. You know you're not supposed to be intimate in any place other than the Intimacy Room. However, this is more severe than just engaging in intimacy outside of the Intimacy Room. This is that plus engaging in intimate acts with someone of the same gender. You are both going to be put in Isolation with additional punishment."

"Fuck you. I was comforting him. There was NO intimacy going on. I just hugged him!"

"Why did he need to be comforted?"

"He shouldn't be sad, this house is perfect and he should have everything he needs. Sign here and write down the reason for your punishment. No more questions."

Camo walks away from the desk, Titanium quickly following him. The Leader sighs and opens one of the desk drawers that contain a number of syringes. He calmly goes over to Camo and stabs the syringe in Camo's neck, making Camo collapse instantly. 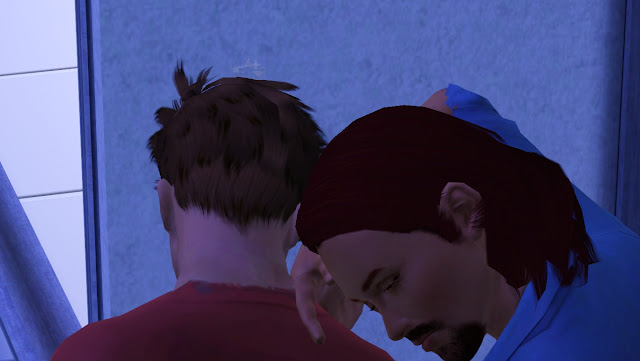 Titanium screams and rushes over to Camo, but The Leader swiftly pulls out another syringe and stabs Titanium in the neck as well. 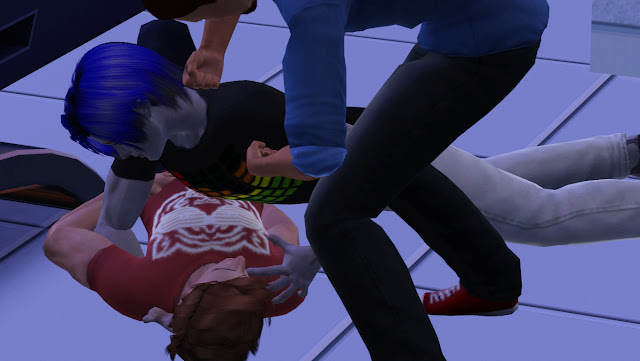 Titanium collapses onto Camo, unconscious. The Leader then picks them up one by one and throws them in Isolation. 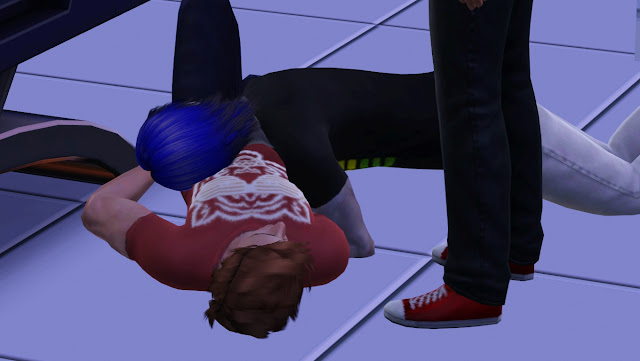 I'm so tired but I can't sleep
Standin' on the edge of something much too deep
It's funny how we feel so much but we cannot say a word
We are screaming inside, but we can't be heard

I'm so afraid to love you, but more afraid to lose
Clinging to a past that doesn't let me choose
Once there was a darkness, deep and endless night
You gave me everything you had, oh you gave me light

~ I Will Remember You by Sarah Mclachlan ~
Camo opens his eyes slowly and sees a single toilet in front of him. He looks up and sees a bare bulb hanging from the ceiling. He feels groggy and disoriented. He tries to get up, using the wall for support, but his knees give way and he falls over. Deciding there's really no point in standing up anyway, he sits back down on the floor and puts his head in his hands. He wonders how Titanium is doing, and hopes he's okay since Titanium has feared Isolation ever since he met him. 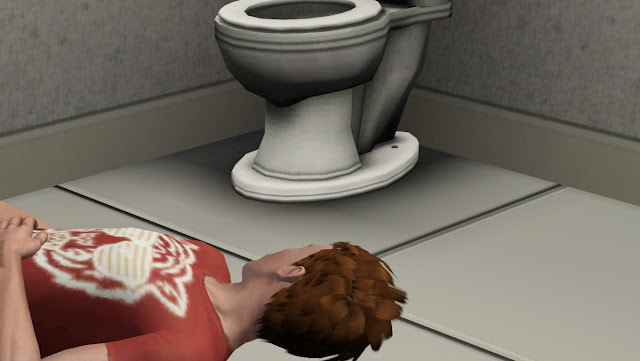 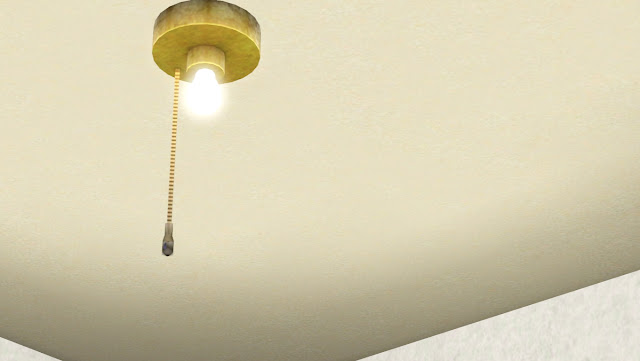 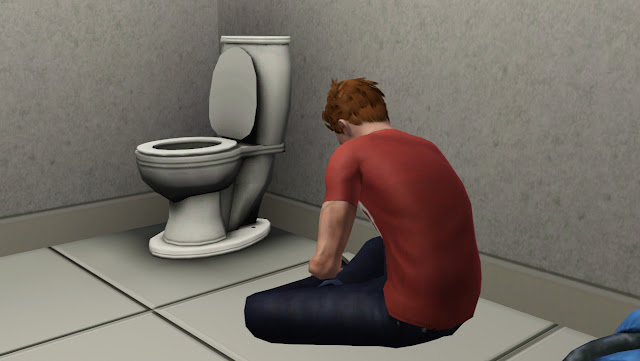 The door opens and Camo looks up, a strange man comes into the room. He shuts the door behind him, and pulls Camo roughly to his feet. Camo stumbles a little and glares at the man. He barely has time to react before a punch to the side of his face makes him fall down onto the cold tile. Pain radiates through his jaw line, and the man pulls him to his feet again, only to make him fall to the ground with another punch. After he pulls Camo to his feet, Camo questions his assailant.

"Why are you doing this?"

"Because you need to be punished. Boys should never be intimate with each other. It is wrong, and all those thoughts should be purged from your existence."

"I wasn't being intimate with him."

Camo is about to continue arguing, but another punch sends him hurtling to the ground again. 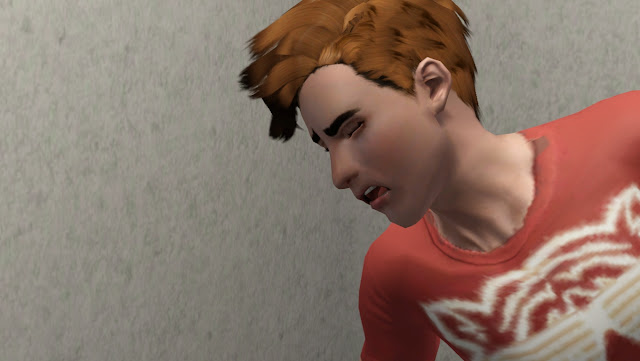 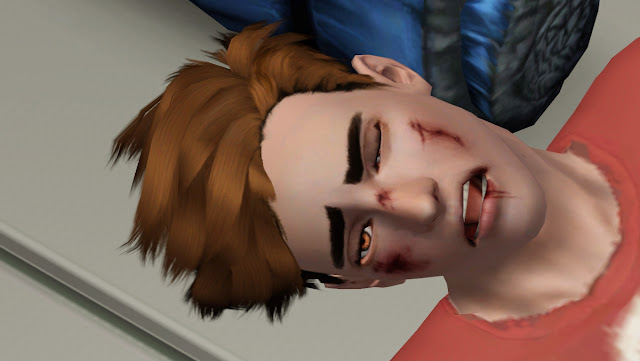 After thirty more minutes, which seem like a lifetime to Camo, the man punches him for the last time and roughly sets a bowl of soup and a glass of water in the room before leaving.

Camo lays on the floor, exhausted from his beating. His face is numb and he can't seem to see straight. He closes his eyes for a few minutes. Finally when he can see again, he notices the food next to the wall. 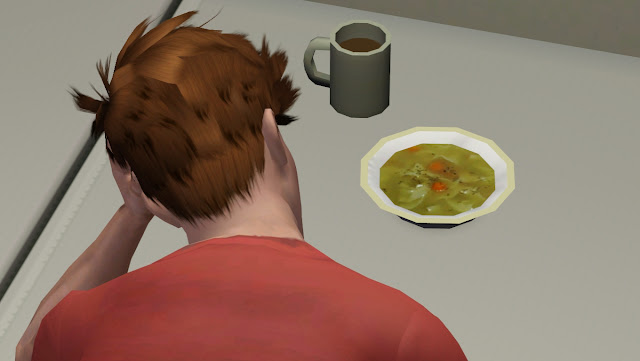 He crawls over to the food and eats it slowly, wincing when the spoon touches the cut on his lip. After a few more bites, he gets used to the pain on his mouth and finishes his dinner. He decides to sip his water slowly and keep it around in case he doesn't get any more for many hours. He puts the glass of water in the corner so he doesn't tip it over and unrolls the thin blanket, curling up in it. He cries into the blanket, thinking about Verona and how he wants to see her right now, imagining him snuggling with her in her bed, and how a simple touch from her makes him feel warm inside. He thinks about Titanium and hopes that he can make it through the week. Camo's thoughts go back to Verona and he knows he has to survive no matter how bad things get because he knows that he wants to see her again. 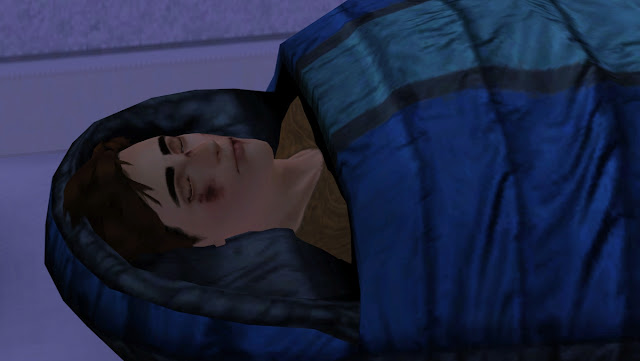 Titanium is huddled in the corner scared out of his mind, and he thinks he is losing it. His face hurts from being beaten and he's hyperventilating. 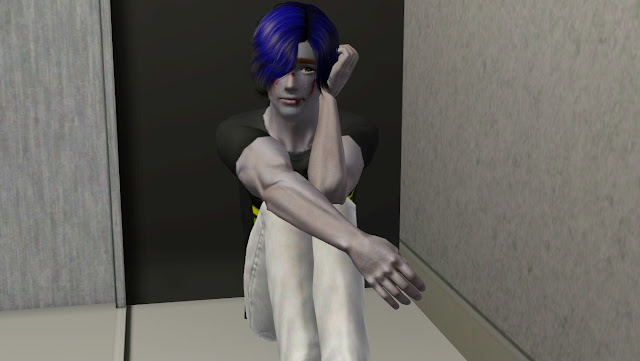 He hasn't been able to think as well as Camo has, and he's finished his water as well as his soup. He starts coughing because he's hyperventilating and his throat is dry. He hopes Camo is okay, but he's afraid Camo is having it worse than him because Camo mouthed off to The Leader. 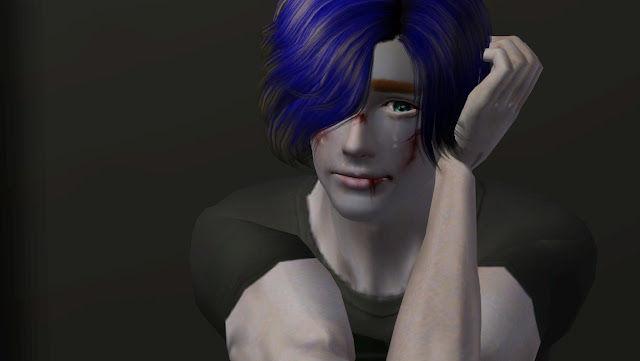 No matter what he does, he can't stop the tears from coming down, and unfortunately he starts thinking about what Barry did to him. He thinks it's so unfair that Barry didn't get in trouble and he did. Why did Barry even do that to him? He thought Barry was someone who followed every rule with no exception. He was just in the library, reading a book while Camo was visiting Verona. Barry came over and said hi, so he talked to him. All of a sudden, Barry pushed him against the bookcase and told him to shut up. 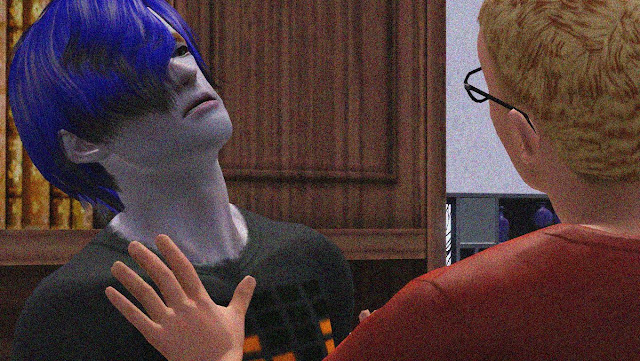 Then Barry tried to kiss him. Titanium pushed him away and tried to leave, but Barry grabbed his shirt and removed his pants, touching him where he was uncomfortable. Barry made Titanium bend over, draping him over the chair he had been sitting on. Then Barry pushed inside him, groping the front of him the entire time with one hand, while grabbing his hair harshly with his other hand. At first Titanium struggled, but it hurt to do that, so he decided he had to stop squirming so he wouldn't hurt himself more than Barry was already hurting him. 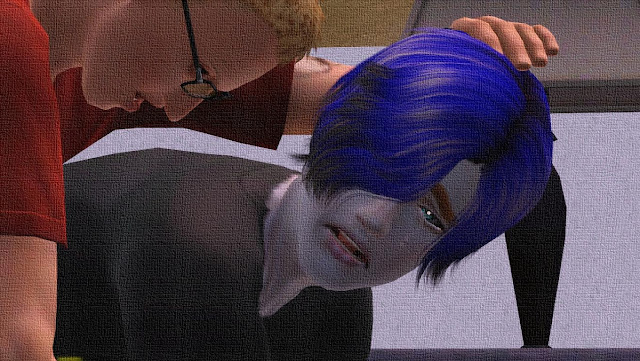 Titanium crawls into the blanket and hugs himself. He wishes he'd had sex with Absolon first, and then he gets angry because Barry took that chance away from him. He gets scared that he might not make it through the week if he gets beat up again. He's never felt as strong as Camo, mentally or physically. He closes his eyes and tries to sleep because he's tired of crying. As he drifts off to sleep, he thinks of Absolon's pink eyes and how they sparkle when he looks at him. 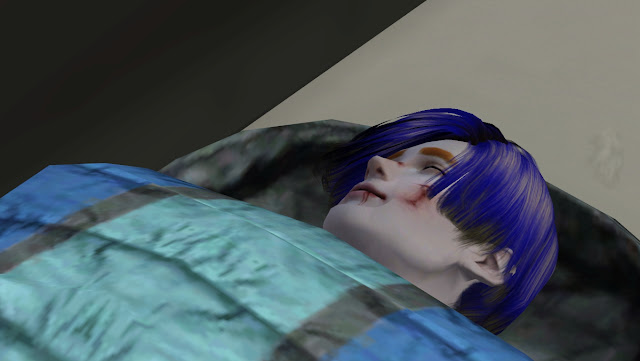 Posted by LateKnightSimmer at 10:39 AM