Jeez, Mom just insulted the shit out of Absolon, and I think he's still stunned from the words. He sinks down onto my bed and covers his face like he's ashamed. I hope he's not, since he has nothing to be ashamed about. Dad is standing in the same place he was, probably also stunned from what he just did. I'm just glad Mom is gone. We hear the gate open, and a screech of tires as Mom peels out of the house. I never thought Mom would ever drive like that. Dad finally snaps out of his trance as the gate shuts. Maybe he was just waiting for confirmation that Mom actually left. He walks over to Absolon and sits next to him. 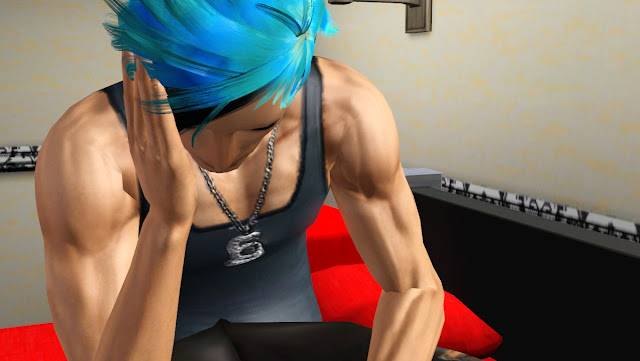 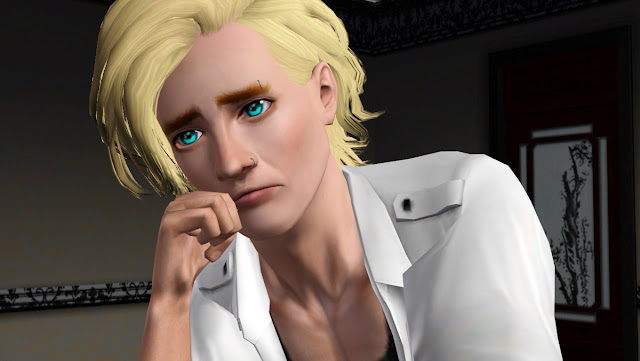 "Hi, Charles. Thanks for standing up for me, I know I'm not your responsibility or anything. You didn't have to do that."

"No, I did. She is crazy, and I took you in. I want you to feel comfortable living here."

"I've never had anyone talk to me like that before. No one knew what my preferences were except Verona and Camo. Not even my parents." 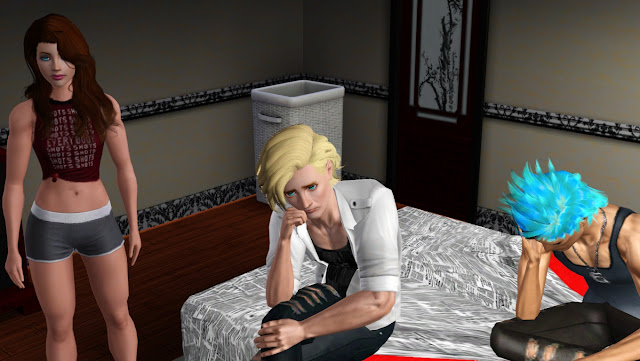 "Well you are lucky then, lots of people get bullied their whole lives because of their preferences. I'm sorry Kalya was so mean to you. Are you all right?"

"I don't know. I think I am, but I'm still a little shocked, like I feel like I did something wrong by existing."

"No. You did nothing. You are fine just the way you are."

The intercom sounds, and I volunteer to answer it so Daddy can continue to comfort Absolon. I'm super excited that it is Camo, who has been back from Egypt for a day now, but didn't want to come over right after getting home so as not to raise suspicion. I'm even more excited that he brought Titanium as well because he wanted to see Absolon. Perfect timing, now that Mom is gone, and Absolon needs some comforting. I practically run Camo over when he comes in the front door. 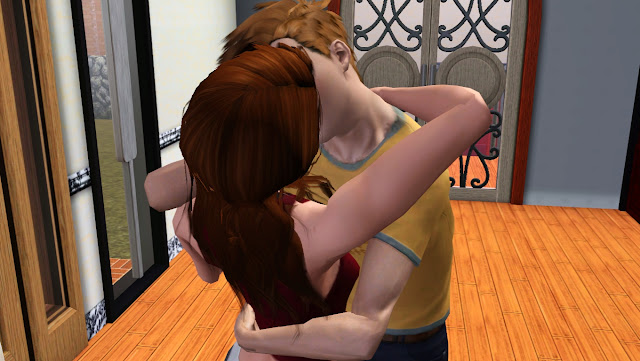 "Camo, it's been horrible."

"Mom. She's been horrible. Dad just kicked her out, but not before she insulted Absolon. Titanium, you should go into my room, the first door on the left. Absolon needs you."

I feel like I've been kicked. I don't know how that conversation between Kalya and I went downhill so fast. One moment I was sticking up for Verona telling her mother that we weren't involved, and the next moment I was being treated like a dirty sock. Questionable lifestyle? Inappropriate? I'm not inappropriate! My lifestyle is not questionable! I am not dirty! I feel dirty, though, but I know I shouldn't. I know I didn't do anything wrong, so why do I feel out of sorts? I look up and see Titanium standing there. He's got concern written all over his face, so Verona must have clued him in that I needed him. Charles looks at me, then to Titanium, and then gets up, leaving us alone. That man has the intuition of a god, sometimes I think he's psychic. 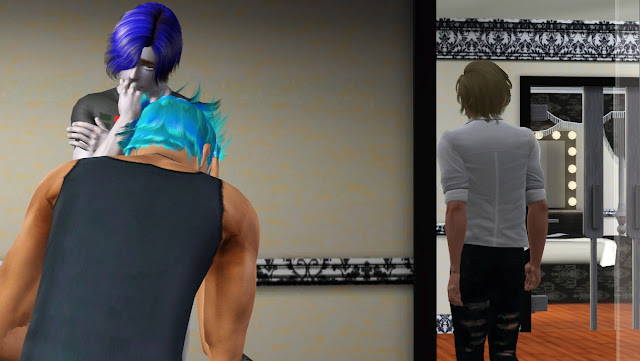 "Oh, Verona's mom just told me that I lead an inappropriate, questionable lifestyle because I like boys. My insides hurt. Is there something wrong with me?"

"No, of course not. Why do you think she said that?"

"I don't know. I- never- no one's ever told me that liking boys was wrong. I wasn't very close to either of my parents, so I never told them I liked boys. I guess, boys are supposed to like girls, and that's the only way it is? I don't know." 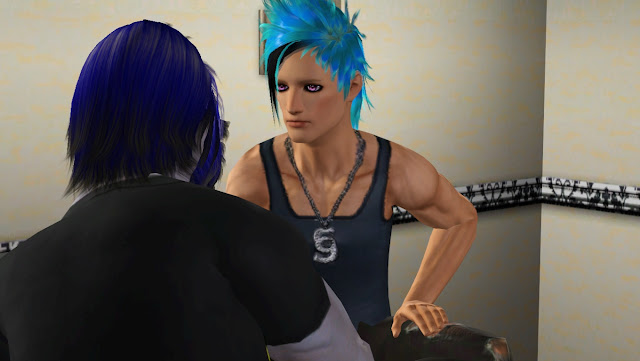 Titanium looks down at the bed, or my leg, I don't know which, with his pretty blue eyes.

"Well, I get told liking anyone, boy or girl, is wrong. You know."

"Yeah, that's true. I feel right when I'm with you though, like everything is good in the world. You make me happy."

"That's good. You make me happy too. I feel like The Compound is wrong to tell me that liking someone is a bad thing, so maybe Verona's mom was wrong, and we're fine."

He looks so sad, and suddenly I've forgotten how shitty I felt earlier because I want to make Titanium feel better. I'm glad that he has come to the realization that the way The Compound views relationships is messed up, but I'm annoyed that it's made him sad. 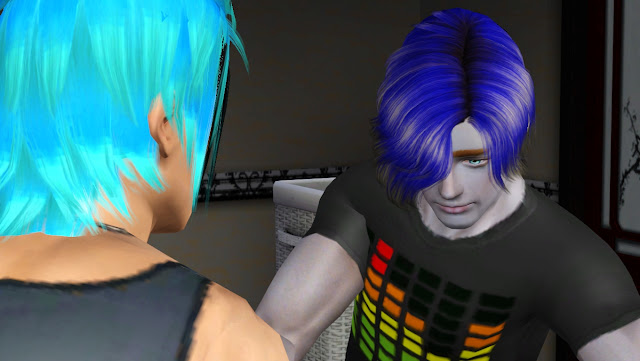 "It was okay, I guess. There were a lot of meetings I had to go to, but there was one day we had free. Camo and I went to the store, and I bought this for you."

He hands me a small box, and I open it to find a necklace that has a pyramid charm attached.

I'm glad Kalya's gone. I feel weird though since she's been with me for so long. It makes me mad that she was just pretending to be okay with Absolon, and then went and said such horrible things about him. I don't even know if anything I said to Absolon made him feel better. I'm so hungry right now. I guess in my annoyance with everything, I forgot to eat. Luckily, there's some leftover sushi in the fridge. Hopefully, I won't have to deal with her any longer. I told her I wanted a trial separation, but I think I just want her to be gone. I know it would be better for Verona if Kalya was permanently out of her life. 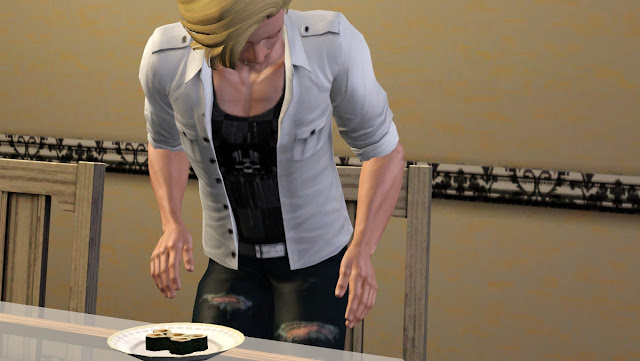 "Dad? Is Mom gone for good? Like are you letting her back in the house, ever?"

"No, I don't want her living here anymore." 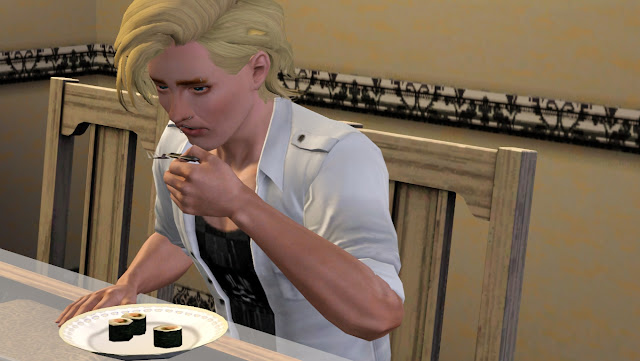 Posted by LateKnightSimmer at 7:46 PM