NOTE: I downloaded some new default skins and eyes for my Sims. They will look different in the pictures, they still have the same eye colors they always did though, just FYI. 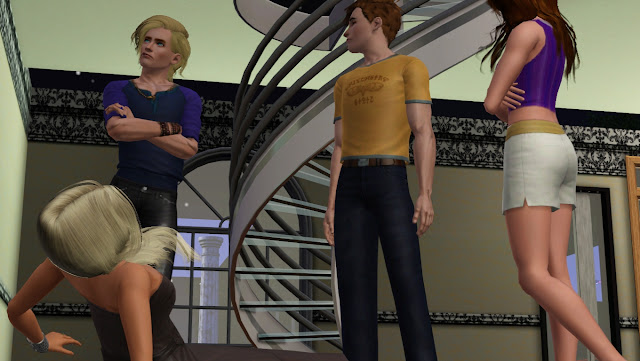 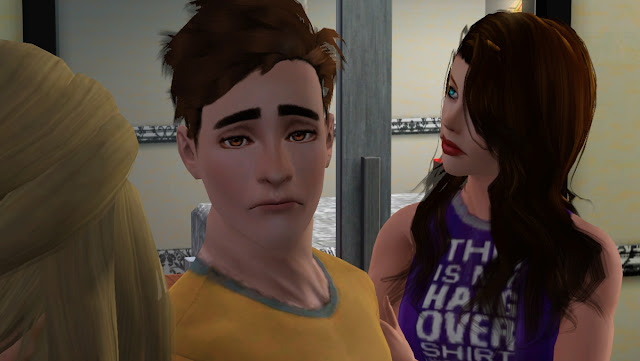 Camo is shocked and a little turned on by Verona's sudden outburst of violence. His face still stings and he can't believe he just got slapped. He doesn't think he did anything wrong. 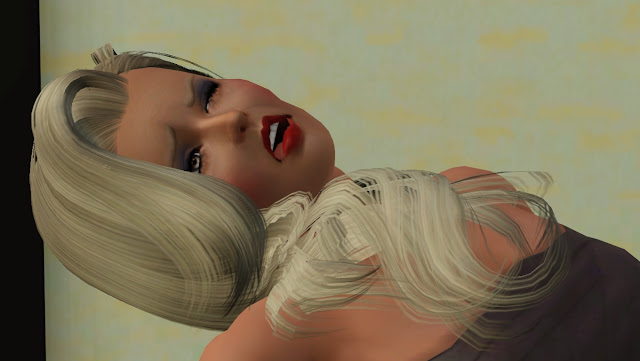 Verona's mother is on the floor still stunned by the punch. Charles makes his way to the other side of Verona's mother, looking incredibly angry. Camo takes Verona's hand and goes into the kitchen with her to get her some food. 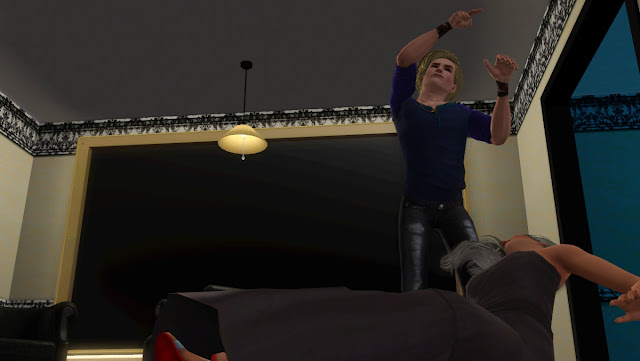 "I'm going to give you one chance to tell me the truth of what happened and why Verona punched you. One chance, Kalya. I'm fucking serious." 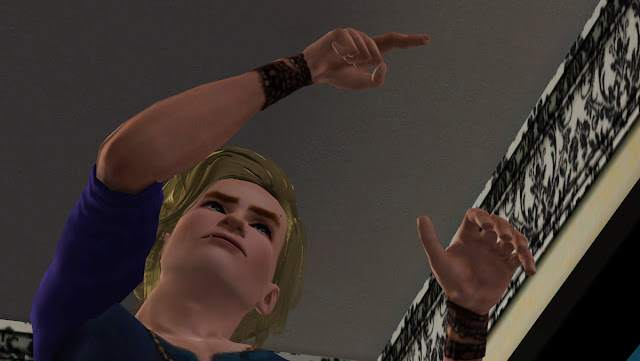 Camo decides on making a can of soup for Verona as he figures that is easy and quick. While the soup's heating up, he puts a glass of water in front of her.

"For being the best boyfriend in the world."

Camo finishes cooking the soup, bringing it and a spoon over to Verona. He sits in front of her and smiles. She looks up at him and laughs. Camo loves her smile and her laugh. He's reminded of the day she was watching him eat soup and forgot to eat her sandwich. 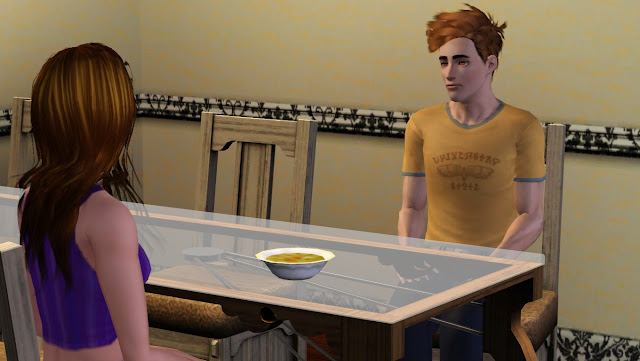 "No, I can take a taxi. You've had a rough night, you should stay home. I'll see you at work."

Camo gets up and puts his arms around Verona's shoulders, kissing the top of her head before he leaves. 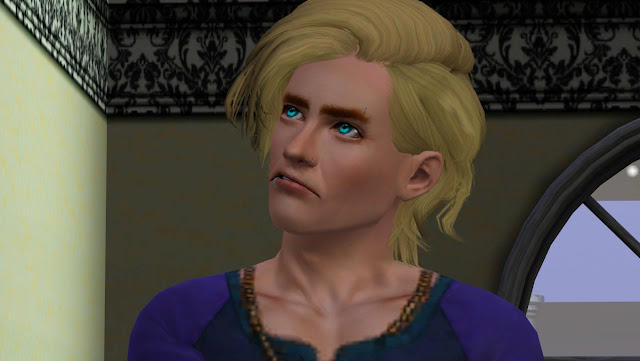 Kalya is on the ground, but I don't care right now. In my mind, she deserved that punch for slapping Camo. How the hell could she do that? What has got her so blinded that she can't see that our daughter loves him? Ugh. I don't even care anymore. I don't care why. I don't care what her problem is. She never answers me anyway, she always gives me some bullshit about how she's afraid for Verona. She has nothing to be afraid of. I'm sick of her crap and sick of putting up with it for so long. Whoo... deep breath, Charles. Don't make any rash decisions in the heat of your anger. I close my eyes for a few seconds, but Kalya hasn't even made any attempt to answer me. I open my eyes and see her standing in front of me with a death glare. Like that's going to scare me or something. 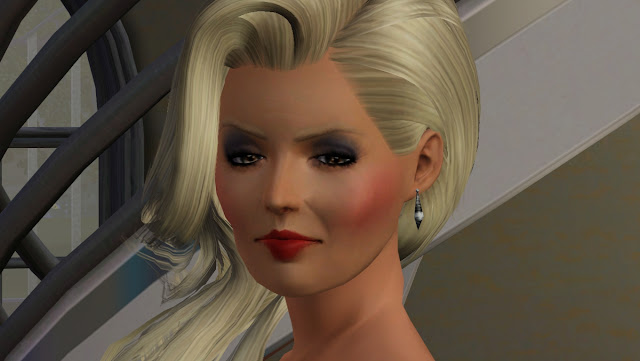 "Verona punched me because she is an ungrateful whore and I can't believe I gave birth to such indecency." 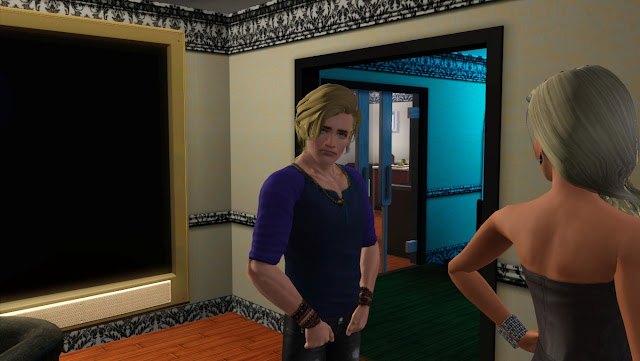 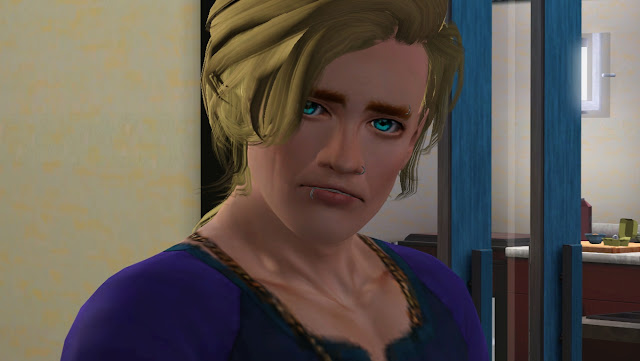 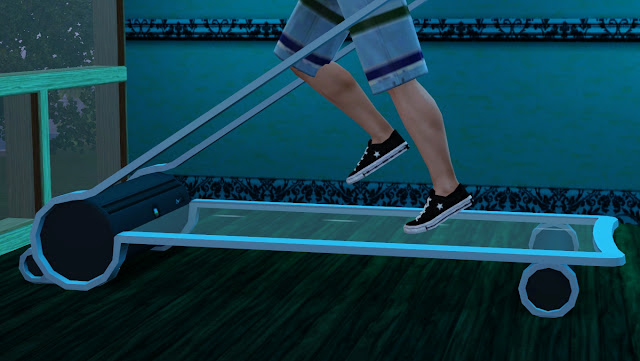 I walk past Kalya and go upstairs to the gym. I need to run away. I figure it's better to run on the treadmill so I feel like I'm running away without actually doing it. This is my house that I bought with my money, so there's no way I'm going to leave. Why did I fall in love with her? I was at the rehab center, and she was my caretaker, the one who made sure I was going to all the meetings. She was gentle and loving. Was she just playing me this whole time? I told her I wanted to be a famous director someday and I realized cocaine wasn't going to help me get there. Did she just marry me for my money? I didn't have any money when we first started going out. When did we get married? We got married after I'd had a few movies under my belt and was doing pretty well for myself. Then we had Victor, Verona's brother, and then Verona. Thank God I have a prenup. Why did she sign the prenup if she was after my money? She's obsessed with status, maybe she married me for status and not money. That doesn't make any sense, but of course, she doesn't make sense, so why does that surprise me? 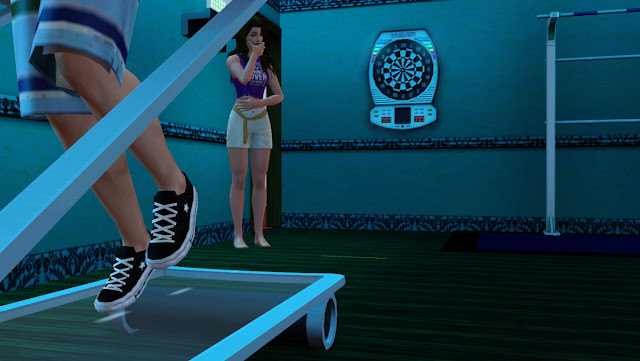 I'm jarred out of my thoughts by Verona, who's timidly standing by the door. I shut off the treadmill and motion for her to come in. We sit on the couch by the wall.

"Do you hate me for punching Mom?" 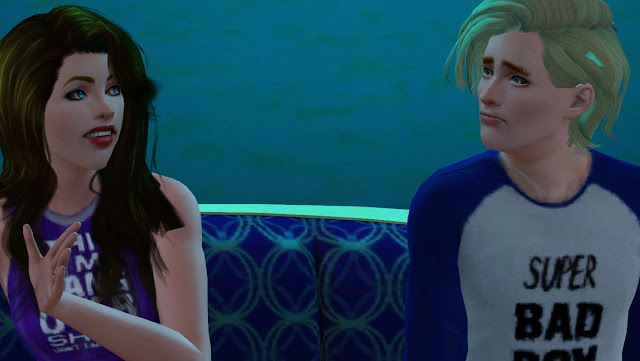 "Oh no, of course not. Nothing you do could ever make me hate you, ok?"

Verona nods, and she looks down at the couch cushions, playing with the fabric.

"Is that all you wanted to say, Verona?"

"No. I wanted to apologize. I mean, she's a bitch, but she's still my mom, and I'm sorry I punched her."

"That's ok. I'm going to be honest with you, I am glad you did because it's not like I can punch her."

"You wanted to punch her too?"

I nod at Verona, a little ashamed that such a violent thought would go through my head. What kind of a man goes around thinking he should punch his wife?

"Do you think I'm a terrible person, Verona? For thinking about stuff like that?" 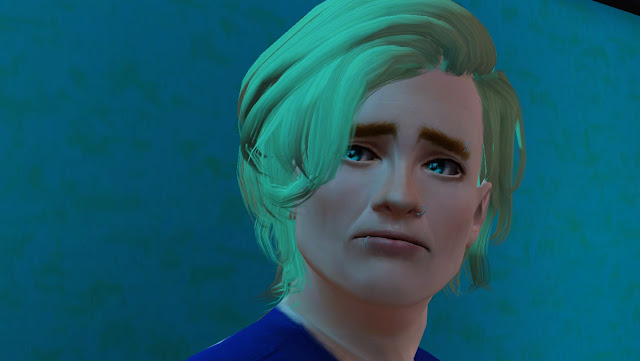 "No, Daddy. Mom was really making everyone angry tonight, it's not like she didn't give us a reason to want to hit her. Do you know why I punched her?"

Verona is still feeling a little scared. I can see it in her eyes. I wonder why. She knows I'd never hurt her.

Verona breathes a sigh of relief. Oh, so she thought I didn't see as much as I did.

"Baby girl, it's all right, I saw Camo say he loved you and he'd never hurt you. Then I saw your mom slap him. That was the last straw for me for tonight, anyway. I can't stand to see her. The look on her face after you punched her was priceless, though. I know you don't go around punching your parents for no reason."

Verona laughs and stops playing with the fabric, turning her beautiful blue eyes to me. 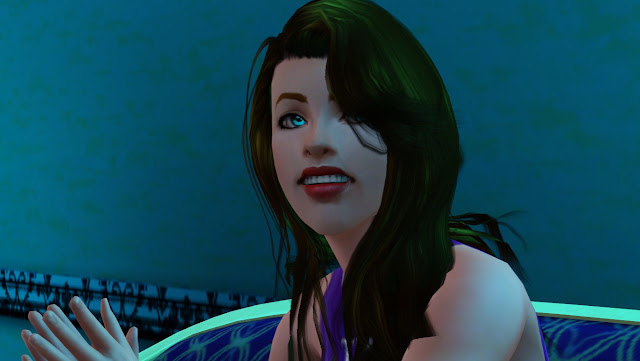 "I'm glad I didn't inherit Mom's tendency to go around assaulting everyone for no reason."

"I just can't believe she hit Camo, after how you two were interacting. I don't understand what's got her so blindsided with her focus on this high society stuff. She wasn't always like this. At least I don't think she was. Maybe I just didn't see it before. Oh, I'm just so confused right now, Verona. I'm wondering if she was manipulating me this whole time and I didn't see it until I saw her interact with people other than me, or if she just finally went off the deep end."

"She was nice, but we didn't have children then. I don't know if that's what caused her to start acting like this, I mean I know she was always trying to set you up, but I didn't think that she would really force you to go into an arranged dating scenario. My eyes were really opened tonight after seeing how your mother still insisted on pushing you towards Marcus even after she saw you with Camo. I don't know what she sees, but when I saw you and Camo interacting, it made me feel happy because I could tell he likes you a lot just by the way he looks at you. When we were eating dinner, and you were in your room, he was so worried about you. It's like I'm realizing she won't ever approve of anyone you date unless it's who she wants. I'm torn because I'm your father, and I feel like I should protect you, like it's my duty, but then I have an obligation to be a husband as well. I don't really want to have to pick and choose between my daughter or my wife." 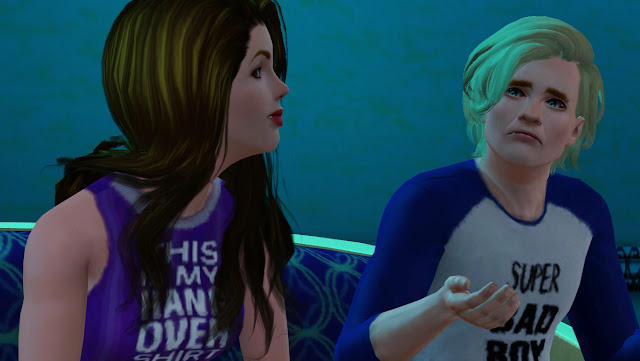 "Daddy, it's not wrong of you to be so disturbed by Mom. Did you know she told me I had to call her Mother because it sounded more appropriate than Mom or Mommy?"

"What? No. That's ridiculous."

"I kept calling her Mom tonight. She made me mad, so I thought, why should I indulge her nonsense?"

"Indulge her nonsense, that's a good way to put it. By putting up with her for this long, I feel like I've been enabling her behavior. I don't know what to do. I'm really mad at her right now. I don't want to break up our family, but I don't like this constant thing hanging over your head. It's driving me crazy that she won't listen to reason."

"I don't know either Daddy, but maybe if you think about who is really the one breaking up the family, it'll give you some insight into what you should do. Good night, Daddy." 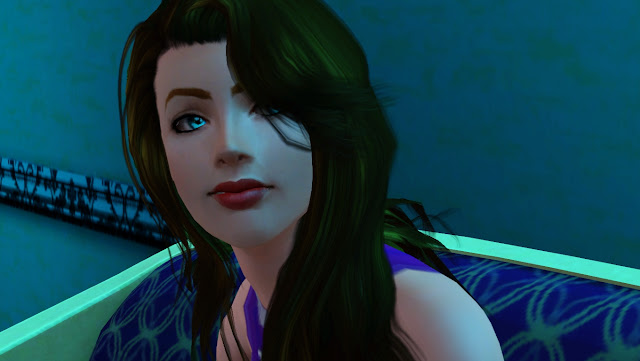 Verona has left me with some wise words. She's such a good daughter. Did I raise Verona all by myself even though Kalya was by my side? Verona turned out so much like me, her good nature, her ability to read people's character despite what their outer appearances might say, her willingness to give people a chance. What did Kalya do? She doesn't even see Verona's personality, she just gets mad at her for not doing what she says. Ugh, my head is exploding thinking about this so much. I go down to the pool area and pour myself a drink and sit by the pool. The cool night air feels good. It's refreshing and just what I needed after this nightmare of a day. 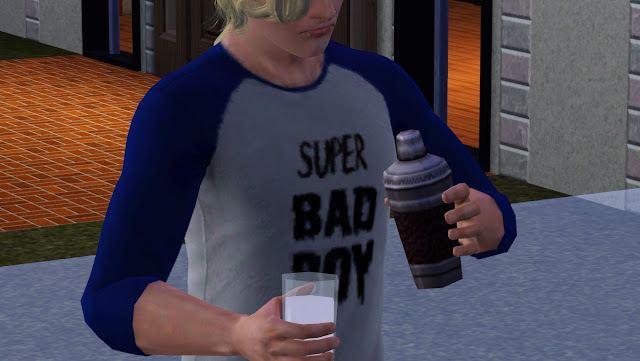 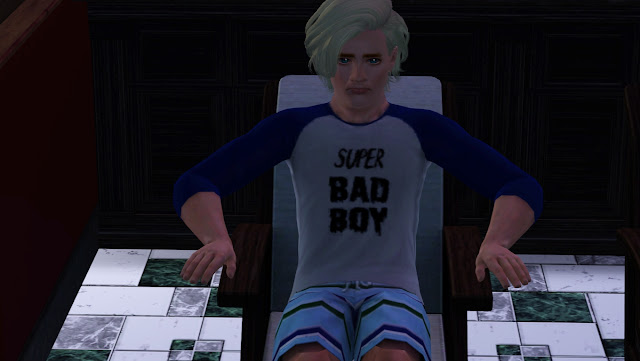 
Posted by LateKnightSimmer at 9:35 PM