I'm disgusted with Verona right now. I don't understand why she can't see happiness when it's looking her in the face. When I saw her in the living room with that boy saying she hated Marcus, I felt like she was throwing away her life. I hated the way he was sitting so close to her with his arm around her, I hated the color of his shirt, how his hair was so unkempt, how he marred his body with that tattoo, how he was looking at her like she was a piece of meat.

"What is your problem, Kalya?!" 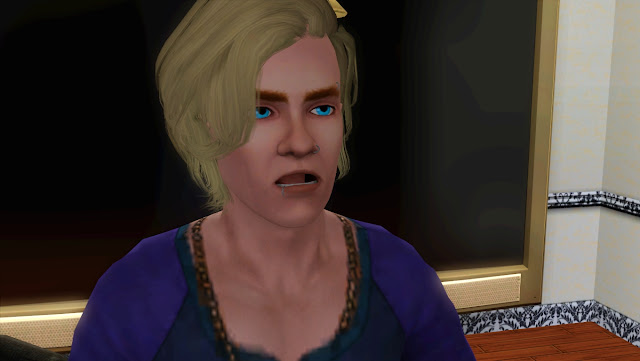 I am interrupted from my thoughts by Charles, who sounds really angry. Perhaps Verona gets her outrageous temper from Charles. She for sure did not learn such rude behavior from me. He storms out of Verona's room, his face contorted in an unpleasant expression.

"Verona was being disrespectful."

"That doesn't mean you slap her! She's your daughter, for crying out loud! Besides, choosing who she wants to love is NOT disrespectful!"

"Charles, don't yell. It's not becoming. How do you expect her to learn respect if not by discipline?" 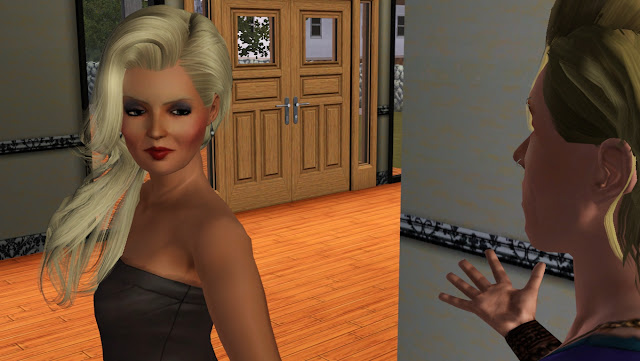 "Are you kidding me right now?! You just beat up our daughter, and you're acting like it's fine! Respect?! You don't know the meaning of the word. Besides, she respects me just fine. She understands respect. It's you who doesn't understand respect!"

"I resent that fact Charles. I understand respect just fine. I am her parent, I know what's best for her. Also, I did not 'beat her up.' She's not bleeding."

I make air quotes when I say beat her up. Charles is overreacting.

"Don't condescend to me, Kalya. I'm not in the mood for your bullshit. One more slap, like you were about to do before I came over, would have made her bleed. For what? You'd make her bleed because she doesn't like Marcus?! Why?! This is a free country, Kalya. Arranged dating is out of date because it's stupid! ARGH!" 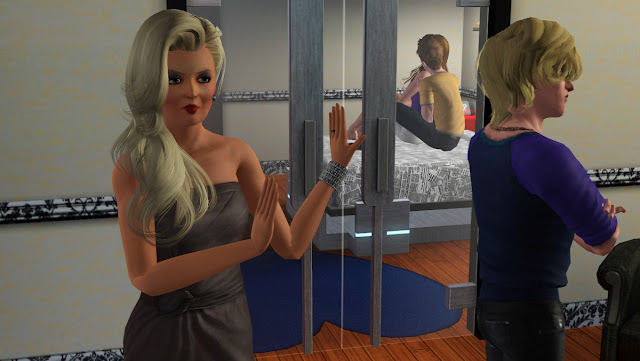 Charles throws his hands up in the air and starts pacing. Such language. I don't know why I ever found that attractive about him.

"If that boy would have minded his own business, Verona would have seen the error of her ways."

"THAT BOY?! Really?! That boy has a name, Kalya, and he cares about Verona! Which is more than I can say for you right now."

Charles gets up in my face as he insults me and I reach up to smack the impropriety out of him, but he steps back and grabs my wrist with lightning speed.

"Don't you DARE fucking slap me." 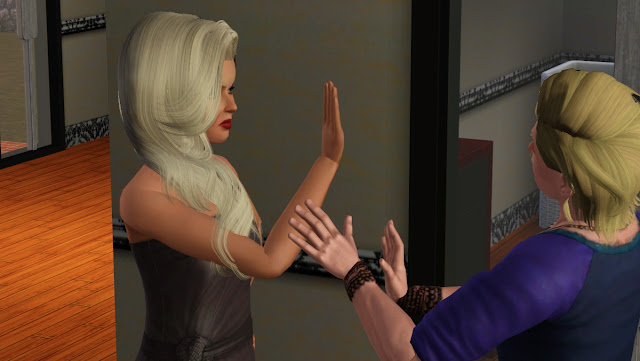 Again with the language. He deserves to be slapped. Charles stands there, glaring at me with such hate in his eyes. I admit I am a little scared right now, but that doesn't change the fact I think he's wrong. I wrestle my hand out of his grasp forcefully and put it down to my side.

"Don't accuse me of not caring about Verona. The girl just needed some discipline. That boy's not good for her."

"You don't even know him! How can you be so judgmental?!"

"Well, for one thing, he's nosy and doesn't know his place. As a guest in our house, he should have looked the other way."

"Oh, what?! So if you were aiming a gun at Verona's head, he should just let you shoot her?! It's called he cares about Verona enough to not want her harmed. If you must know, you made him uncomfortable, and he was very nervous telling me about it."

"I don't need to cater to the likes of someone as mediocre as him." Charles says a bunch of incomplete sentences and some more language. He turns away from me.

"You know what Kalya? You talk of propriety all the time, but you never practice it. We had a guest at our house today and you made a scene in front of him. That's not very proper in my eyes."

"I don't consider him a guest. He's just like that pool boy I caught Verona with a few years ago."

"Damien was a perfectly nice guy that Verona enjoyed spending time with. He did great work on our pool, but you fired him. For what? For having a little fun?" 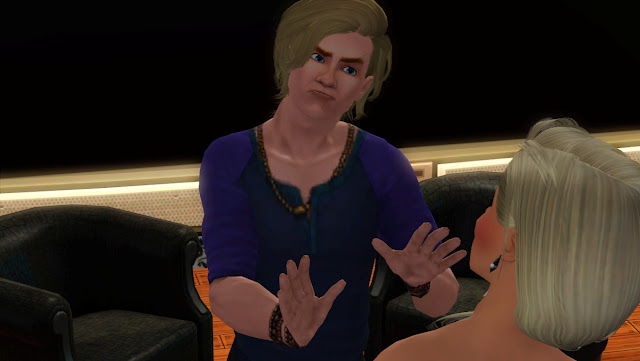 Charles glares at me pointedly.

"Verona had fun too. She said Damien was a perfect gentleman and never made her do anything she didn't want to do. I can't believe you still have the nerve to think you're right about this. I don't understand you. It's like I don't even know you right now."

"I could say the same for you, Charles."

"This is ridiculous. YOU are ridiculous. I'm sleeping in a different room tonight because I can't stand you."

My face hurts. Daddy went outside hopefully to kick Mom's ass, and Camo sits with me and the cloth on my cheek. Camo pulls me out of the fetal position and sits behind me, wrapping his arm around me, while burying his face in my hair. I hear lots of yelling. Daddy doesn't normally get this angry, but I'm glad he is because Mom really went crazy today. 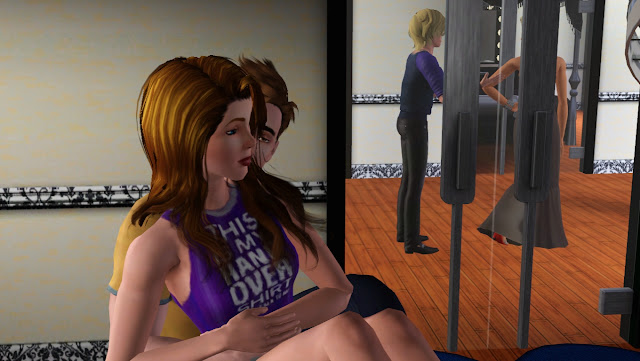 "Camo, I'm really sorry this was the day I chose to invite you to my house."

I love this man so much. I squeeze his hand and mumble yes. 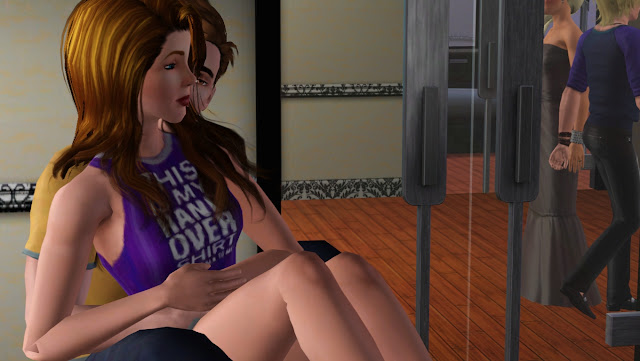 Camo takes my hand and we walk out of my room. My demeanor goes cold again when I see Mom still in the foyer. Daddy is nowhere to be found. He must have gotten tired of yelling at her.

"Mom, if you touch him I swear, I will kick your ass." 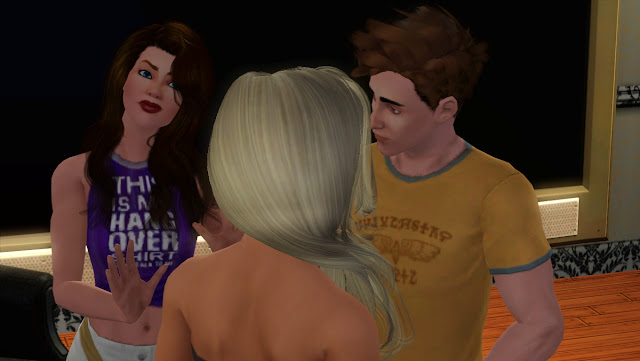 Now Camo looks uncomfortable and I stay with him instead of going to get something to eat.

"What is your name?" 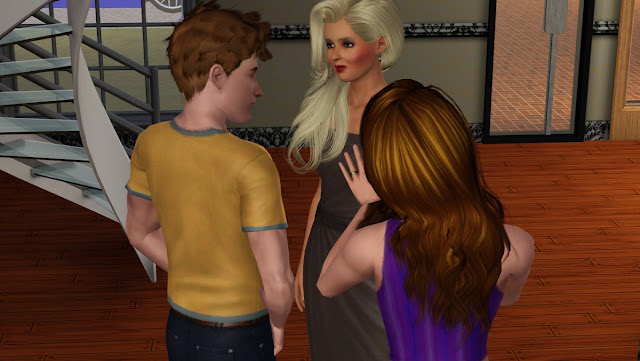 "Nonsense, everyone has a last name. So what is it, hmm?"

Crap. Mom, just shut up. I start pulling Camo in the direction of the kitchen, but Mom moves in front of me, shooting me a dirty look. 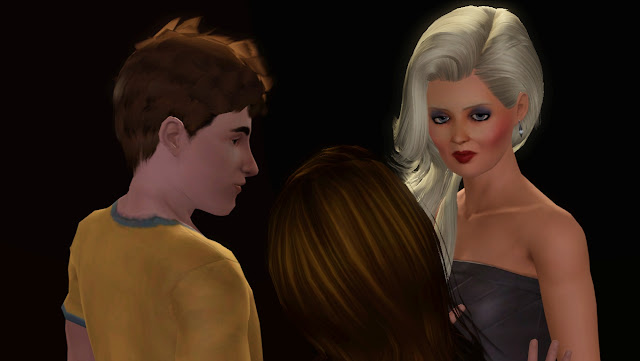 "Are you an orphan? No parents to give you a last name?"

"Yes, dear, that's the definition of orphan. What is your intention with my daughter?"

Ha. Mom is stunned. I try again to pull Camo with me, but Mom maneuvers around me again and stands in front of us. She laughs rudely, like Marcus did at the restaurant, and I suddenly get an urge to throw something.

"If you love her, you should know how to mind your manners when you're over at her house, don't you think? Telling my husband what you saw isn't very nice when you're a guest." 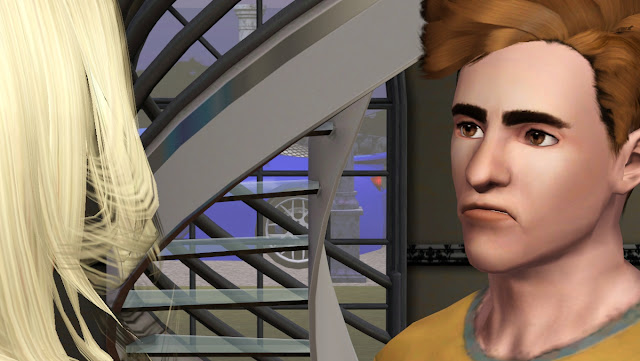 "I love her, so I felt like I had to tell Charles before she got hurt."

"That was not your place."

Camo gets really irritated now and I can hear it in his voice.

"Look, ma'am, Verona's told me how much she doesn't like being set up and we're perfectly happy together. I'd never hurt your daughter, if that's what you're worried about." 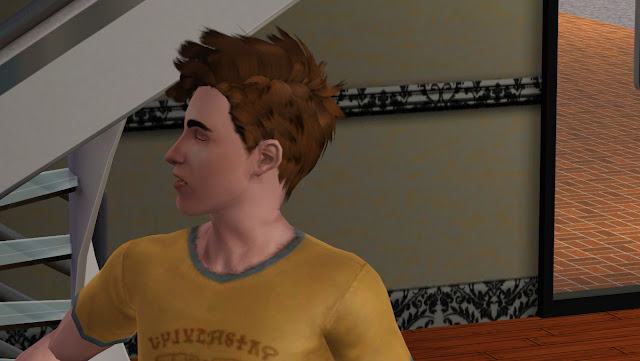 He winces. Before I can think about what I'm doing, all my pent up anger towards her kicks in as well as my instincts to defend my boyfriend, and my fist comes in contact with her face. 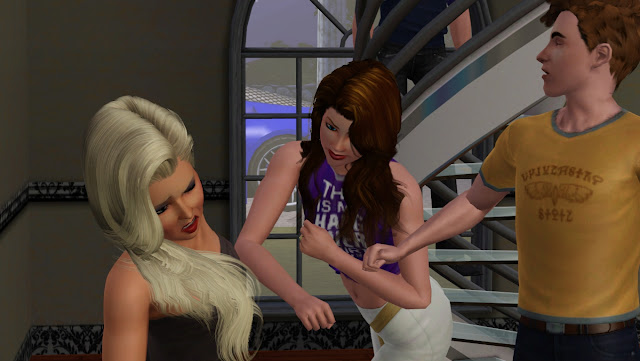 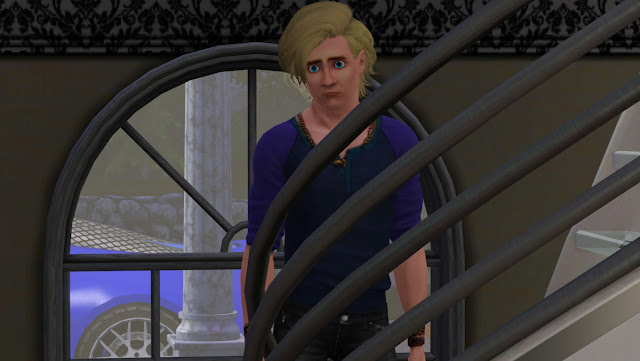 Posted by LateKnightSimmer at 2:13 PM