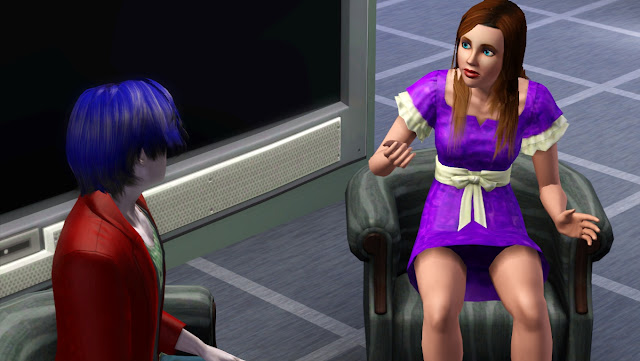 How did the Compound make money?

The Leader would leave the Compound with a donation box and go talk to people. He often set up food stands too. He wanted to give off the illusion that he was helping people and making a difference in the world. He wanted us to buy into his illusion as well.

The Leader stands in the park in the early morning. He has his donation box set up on a table next to him.

"Good afternoon, sir. How are you today?" 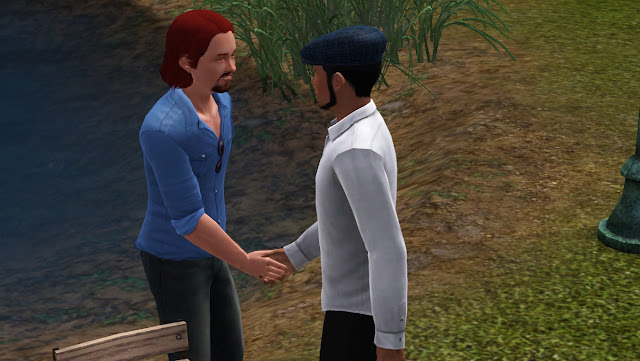 "Just fine, thanks. What is this donation box all about?"

"I own a shelter for people down on their luck. The donations are to keep the facilities in the shelter running so these people can get back on their feet. No one should have to go homeless or hungry if I can help."

The man drops a 20 Simoleon bill into the box, then smiles and walks away.

A woman stops by, also curious about the box. 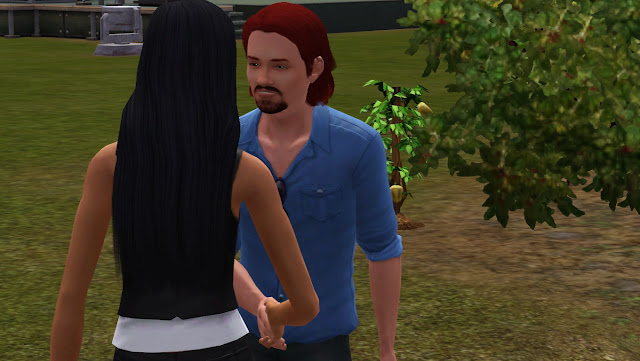 "That's ok, miss. I have this pamphlet for you with some information about the shelter."

The Leader hands the woman a pamphlet that reads 'The Compound. Helping those down on their luck get back on their feet.' There is also an address and a phone number listed. She puts the pamphlet in her purse and walks away.


Titanium, Camo, and Zinfandel are manning a table displaying a various assortment of dishes. The Leader walks up to them to check on their progress. He looks inside the payment box he placed on the table earlier that day. There are many Simoleons in it. He smiles to himself and puts the box back on the table.

"Hello children. How is the sale coming along?" 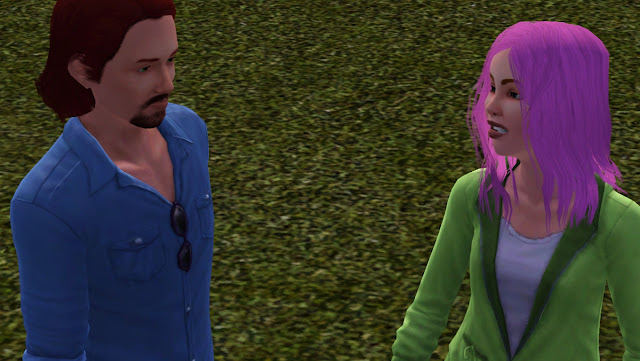 The Leader walks away, carrying his donation box. He goes back inside the Compound. Camo glares in The Leader's direction, unhappy with how his day is going.

A woman comes by and looks at the food on the table. Titanium greets her kindly and smiles. She picks out one of the dishes and Titanium packs it in a to go box for her. The woman drops a 10 Simoleon bill into the payment box and smiles. 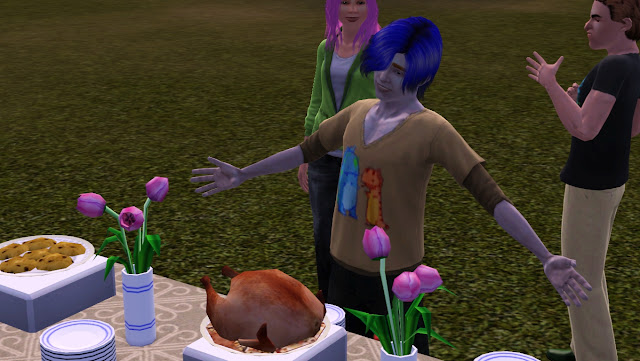 "This is lame. Why don't we get money for wasting our time doing this? It's getting dark, are we done yet!?"

"Camo! Would you stop complaining? We are helping people. That isn't wasting time. Besides, we don't need money, The Leader feeds us and gives us shelter and clothes on our backs." 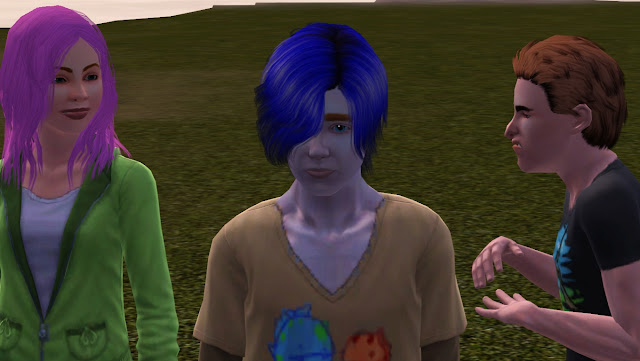 Titanium yawns, bored by Camo and Zinfandel's constant fighting. He agrees with Camo, this does seem like a waste of time, but he doesn't want to get into the middle of anything. He is envious of Camo's explosive personality because he wishes he was brave enough to say something.

"Yo, Titanium. You agree, right? This is just a waste of our day."

Titanium looks Camo in the eyes and nods slightly.

"See, ass kisser? Even the quiet boy who follows the rules thinks this is a waste. What the hell's wrong with you?"

The Leader comes back outside and smiles. 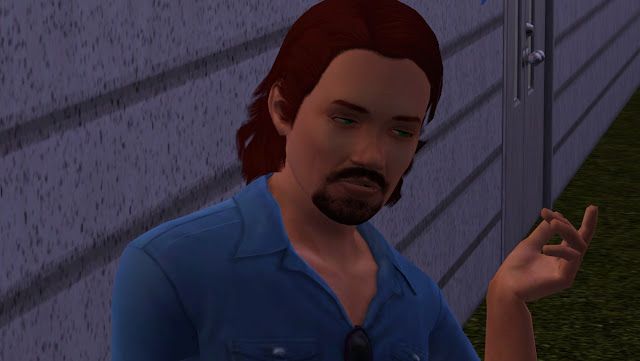 "Hello children. You did a wonderful job today. This food booth can be cleaned up and put away now."

Camo glares at The Leader.

"Can we at least eat some of the leftovers for dinner?"

The Leader ignores Camo's irritated tone, smiles, and puts his hand on Camo's back.

"Of course, my son. Take as many leftovers as you want. Consider it your reward for helping me today."

Camo takes a large portion of turkey, vegetables, and potatoes, and heads inside to eat. 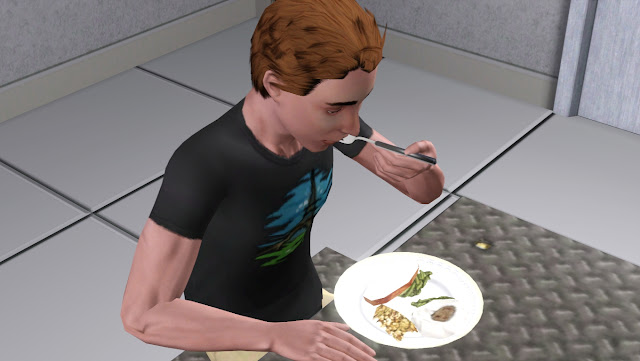 Did The Leader make everyone work as a volunteer?

Not everyone. He usually only made teenagers do volunteer work because he wanted to keep us secluded from the real world. We couldn't ask questions if we never became curious. 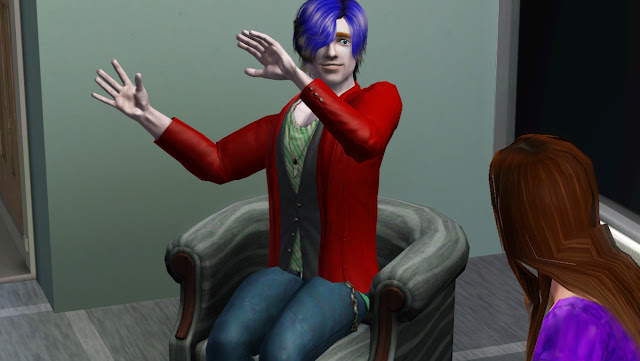 It is class time again, the second class of the day for the three teenagers. The subject of the class is The Strangers, which is taught everyday. Titanium is always tense during this class because it reminds him of his past. Every time he tries to move on, he feels like his face is shoved in it once again.

"Now class, I cannot stress the importance of not interacting with the Strangers. They are dangerous and will judge you for being a part of this home. They will make you feel bad about yourselves and try to hurt you. Some of them are manipulative and will try to lure you out with sweet words, fake smiles, and false promises. You must not believe them." 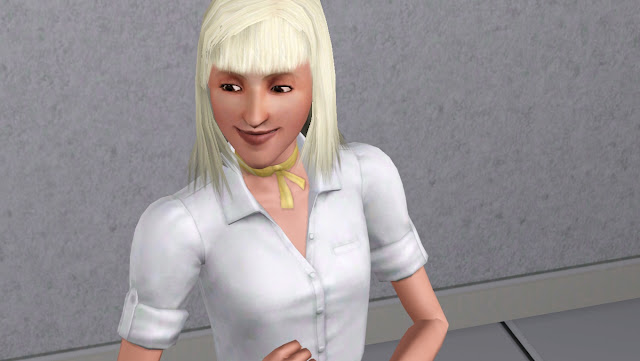 "How can that be? They didn't seem so bad when we were serving them food. Most of them even smiled."

Camo enjoys making the teacher uncomfortable with questions, but he is always careful in how he words them.

"Camo, you didn't listen. I just said they will lure you out with fake smiles. Don't be gullible."

Camo is insulted by the teacher's comment and remains quiet for the rest of the class. Zinfandel raises her hand. She looks confused.

"Why do we help The Strangers with food booths if they are out to hurt us?" 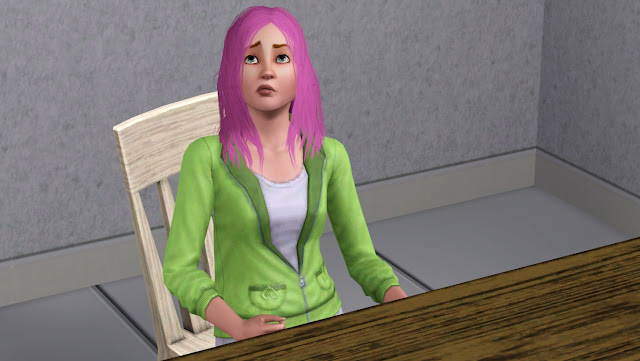 "Good, Zinfandel. We in this house are of pure hearts and souls. The reason The Strangers are bad is because they are impure. We want to help them and show them that they too can become pure. This is why we show our generosity to them. Food booths are one way of doing this. It takes much time for a Stranger to see our good natures, and we must not be pushy or they will show their dangerous sides. We show them kindness in small doses so they can take it in and realize for themselves that this house is a place they want to be." 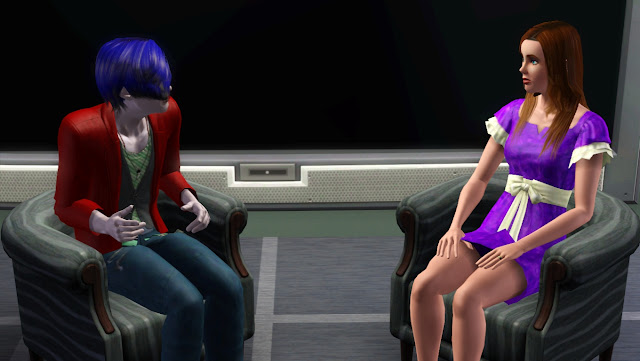 Why do you think the class about The Strangers was taught every day?

Repetitive teachings were a way to make us believe those false words were true. The Leader wouldn't have to do as much work to keep us there if he could make us want to stay there.

Did you believe the teachings from that class?

Not really. The teacher always tried to make us believe The Strangers were really scary people. From what I'd seen through various volunteer jobs, they didn't seem so bad. At the time, though, I thought I was just being gullible.

Titanium is sitting in the courtyard staring at a small fountain lost in his thoughts. He is hopelessly bored and is wondering if there is more to life. If there is, what is it? There's nothing to do in the Compound except think and read. Titanium feels tense and stressed all the time. He's running out of things to think about. He resorts to imagining what wearing shorts would be like. It's a ridiculous thought, but it's something that's been kept from him and it sparks curiosity. 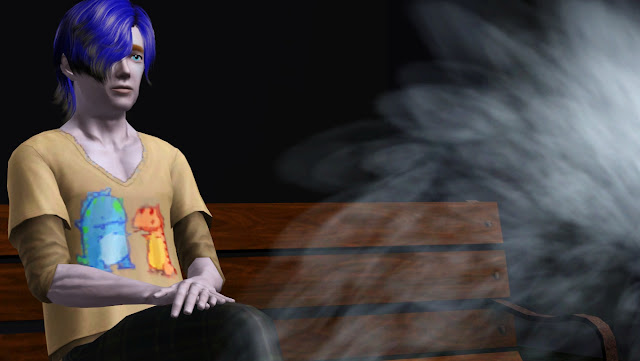 He could go to the library, but it seems like he's read all the books in there already. It's probably more that he just doesn't feel like it today. Titanium starts intently staring at the fountain, its water droplets jumping out of the spout, leaping into the air, and then making their descent down to the patio tiles underneath. He starts to follow a single water droplet through its journey, when he hears footsteps behind him.

"That class is such a crock." 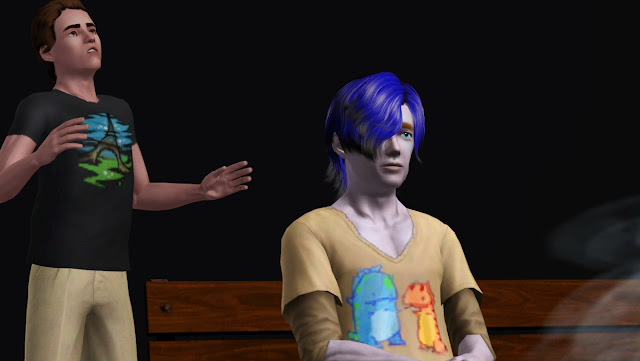 It's Camo's voice. He's glad for the company. Ever since the day Camo apologized to him, Titanium has been warming up to the fact that he might have a friend. Despite that, Titanium still remains fairly closed off to Camo. It's nothing personal against Camo, it's just that Titanium has become a wall of silence because of how life has treated him. He wonders how him and Camo are so different considering they were both born here. Perhaps it's because Camo has never been in Isolation. Titanium doesn't know because he hasn't asked. After remaining silent for a while, Titanium finally answers Camo.

"Yeah, it's boring, and I'm tired of going to it every day."

Camo goes around the back of the bench and sits down next to Titanium. He gets a mischievous smile on his face.

"We should skip it tomorrow." 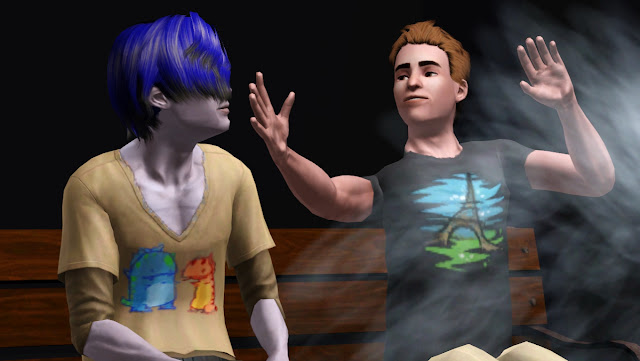 Titanium grows nervous and starts fidgeting. Then he starts making up excuses for why he doesn't want to skip class.

"And go where? We can't exactly leave. The Leader knows us, it's not like we can hide." 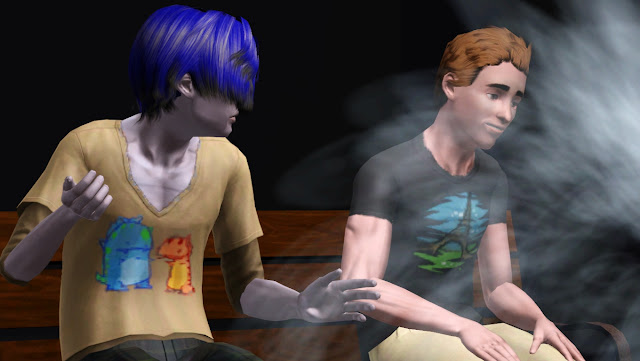 "Why don't we just stay in our room and hang out?" 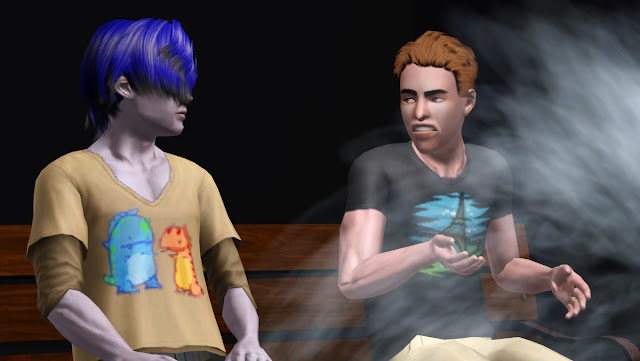 Titanium rolls his eyes. He dislikes Camo resorting to name calling all the time, but he can't help thinking that Camo might be right. Hanging out in their room wouldn't be the worst thing in the world, and not having to listen to the teacher and Zinfandel's incessant drivel is sounding more and more tempting.

Absolon goes over to Mrs. Balestrom after the cameras stop rolling.

"Mrs. Balestrom, thank you so much for doing this for Titanium. Telling his story has really helped him come out of his shell." 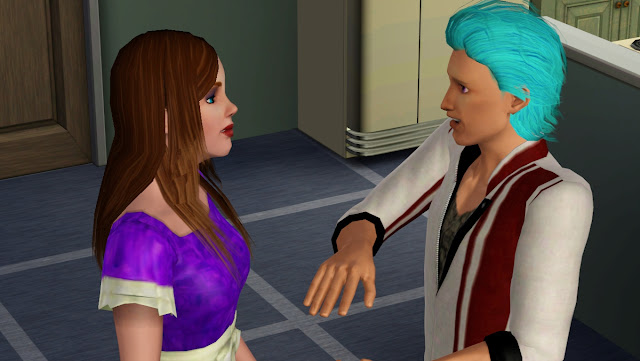 "You're welcome. I have been looking for a good documentary topic for a while now.  The public needs to realize that there are still organizations out there who use brainwashing techniques and that it is not just a thing of the past. I'm very glad I could help you both." 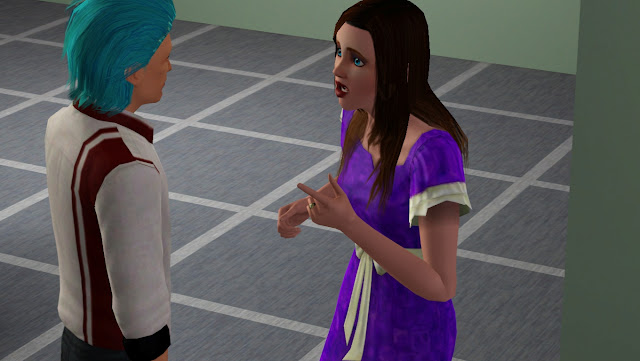 I make my way to the back of the set where there is a small kitchen. Camo is there adding some seasoning to a pot of mac and cheese. I smile at him, glad that he's now my best friend. If it weren't for him, I would still be stuck in that place. 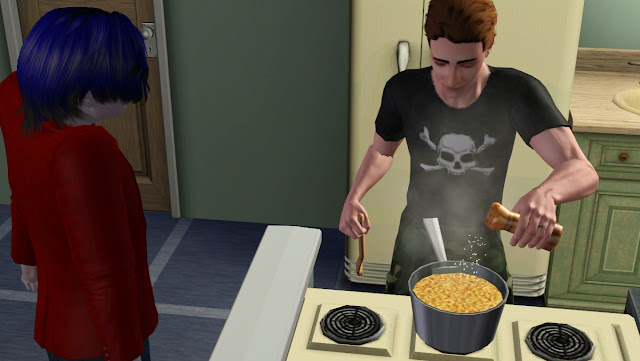 Posted by LateKnightSimmer at 11:13 AM