Music Track - Play it if you want to listen.

As the documentary came to a close, our very last interview segment was about how I felt when I heard that The Compound had been raided. It was five years ago, and I was sitting on the couch watching tv with Camo when the news interrupted our show. 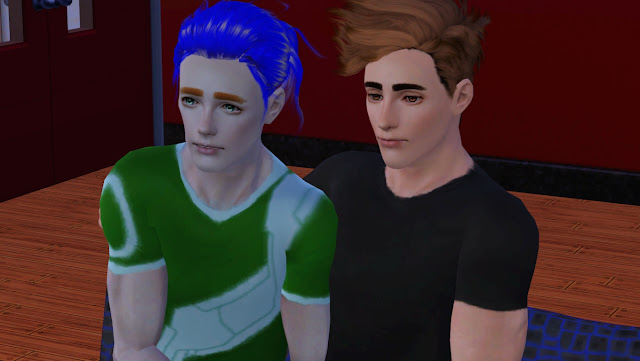 "Breaking news. This live from Chopper 48. The Compound, a local homeless shelter, has just been raided. The Leader, also known by his real name of Marshall Lexington, is being arrested for running a shelter containing illegal drugs. The undercover officer placed within The Compound a month ago has bruises on his face and body from beatings he endured while inside. He has been taken to the hospital and is expected to make a full recovery. The Compound is going to be shut down. Some residents are not taking this lightly, purposely attacking officers and firing at them, screaming that they would die for The Leader before they will go with The Strangers. Reports from the undercover officer revealed heavy conditioning and brainwashing that went on within The Compound. Officers are detaining residents and they will be placed in a psychiatric ward for deprogramming. Now back to your regularly scheduled program." 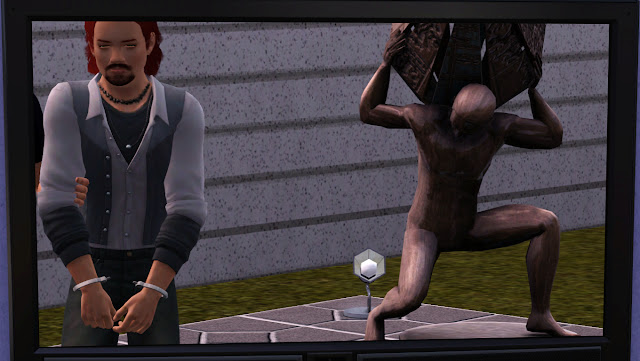 Camo was excited when he saw the report, but I was scared because I thought for sure The Leader would manipulate the courts, be set free, and then come after Camo and I, killing us. Camo told me to have faith that we would be okay, and I wished I could share his courage. Time passed and no one came for us, so eventually I realized it was over, for good. 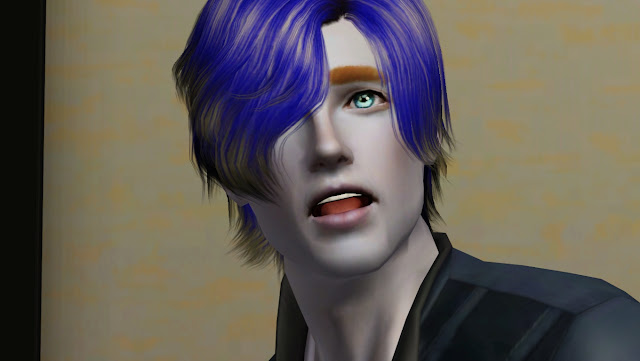 I had a good feeling when I finished the final interview segment of our documentary, which was named The Compound: Silicon Shores' Silent Danger.  Verona and Charles set up a release party to announce that they were going to be advertising it to some television networks.I was standing with Camo at the snack table when Verona went up on stage and started singing Stronger, by Kelly Clarkson.

You think you got the best of me
Think you've had the last laugh
Bet you think that everything good is gone
Think you left me broken down
Think that I'd come running back
Baby you don't know me, cause you're dead wrong 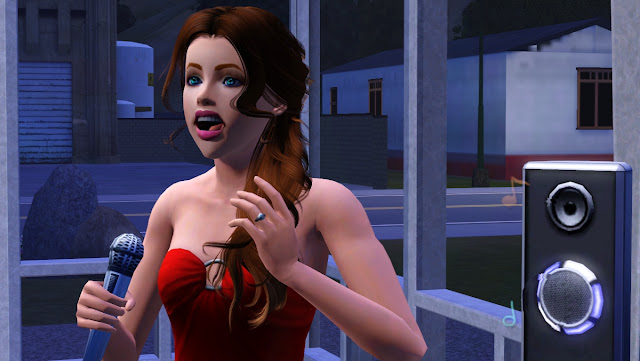 You didn't think that I'd come back
I'd come back swinging
You try to break me, but you see

As she was singing, I observed Camo. He was immediately drawn in and I could see the love radiating from his eyes. Even after all the years they've been married, Camo is still as lovestruck as he was when he first saw Verona on the beach so long ago. If that isn't true love, I don't know what is. Absolon comes up behind me, wraps his arms around my waist, and starts grinding on me, enjoying the beat from the song. I love him so much, and I wouldn't have gotten as far in my healing as I have if it weren't for him. He and Camo are the most important people in my life. Without them, I don't even want to think about where I would be right now. 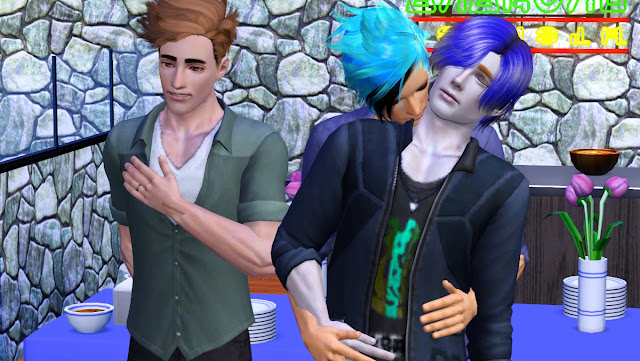 The Leader sits in his jail cell, staring at the wall. He's been in prison for five years. He has some friends that he talks to regularly, but most of the inmates find him insufferable and creepy. With those friends, he's been successful at teaching them his ways, using redemption as a way to lure them into his way of thinking. He counts on the inmates' guilt as a way to control them. Sadly, jail has not changed The Leader at all, he is still the same manipulative person he always was. 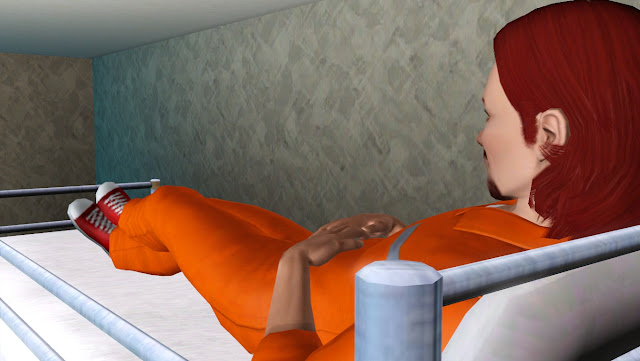 Petunia and Abilene have been irreparably damaged by their time in The Compound. They are now both residents of the Silicon Shores Psychiatric Ward. It is often that they get in trouble for trying to preach to the other residents, although it's not easy to convince anyone of anything since technically they are all crazy people just spewing crazy talk. Abilene on many occasions has tried to avoid taking her medicine and has gotten shock therapy some days. Petunia and Abilene sit together by the piano in the commons area, as it is the only time they can socialize with each other since they were given separate rooms. Their deprogramming class has not gone well for the instructors since both Petunia and Abilene refuse to acknowledge that they have been brainwashed. It is not likely they will be leaving the psych ward at any point. 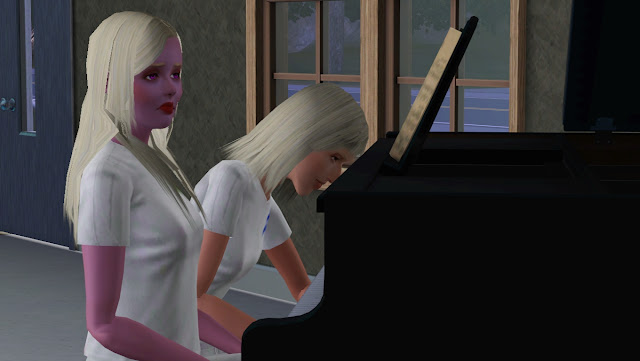 In a cabin in the woods, on the outskirts of town, Barry and Zinfandel reside together. Barry is trying to get The Leader's teachings out into the world again because he and Zinfandel strongly believe in what they were taught. On the day of the raid, Barry took Zinfandel into a secret room containing a tunnel that led to the outside, far away from the television cameras and the helicopter, which couldn't see through the thick trees. From there they found an abandoned cabin, which they quickly fixed up as their new community location. A few people have already joined, enjoying the company they can get when the wilderness gets a little lonely. Some campers have even sporadically attended the free food they give some days of the week. 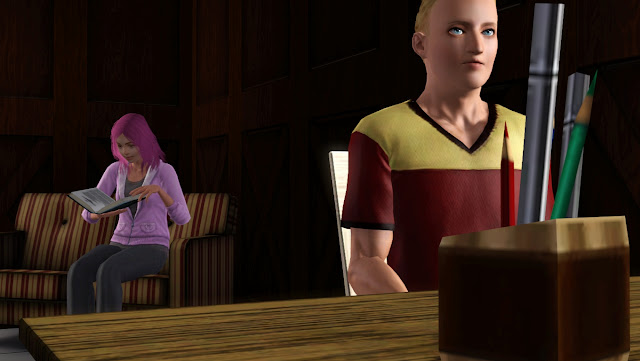 Barry sits at a desk to compose a letter, while Zinfandel is reading a book.

Greetings from Barry and Zinfandel. We were the only two who managed to escape the raid the day you were arrested. We have a cabin in the woods where we have started up your teachings again. Both of us still really believe in your goodness. I just wanted to write to you to let you know we are okay and that your mission is still going strong. In a few years if you are eligible for probation, we would love to have you come join us.

Forever your faithful servants,
Barry and Zinfandel
Posted by LateKnightSimmer at 1:17 PM