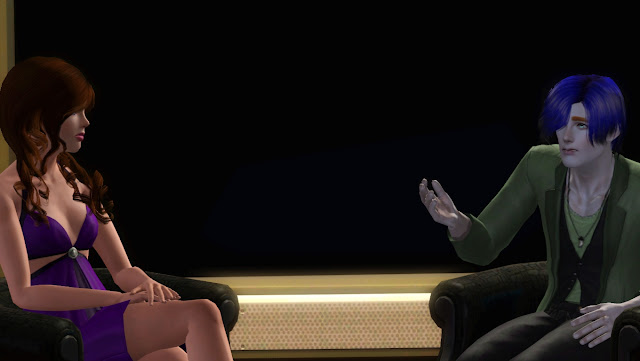 How was life after you left The Compound?


It was different. I had to get used to the idea that when someone wanted to talk to me, it wasn't because I was in trouble or because they wanted something from me. It was a little boring at first because without my scheduled class times, I didn't have anything to do. I had never really picked up any hobbies, and I didn't really know what it was that I liked. I didn't know who I was because the entire time I had lived there, I had never tried to find myself. I was a blank slate. Camo adjusted a lot easier because he knew what he wanted, and that was to be in a place where he felt appreciated and free to be himself. 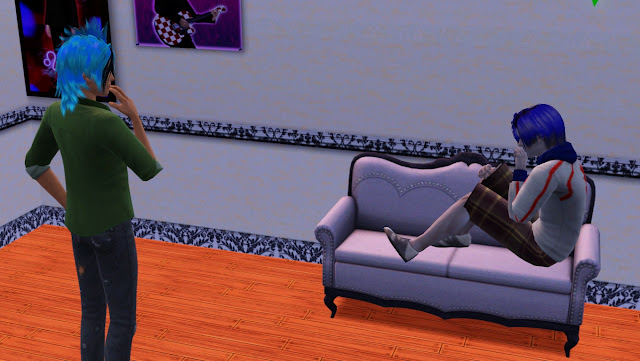 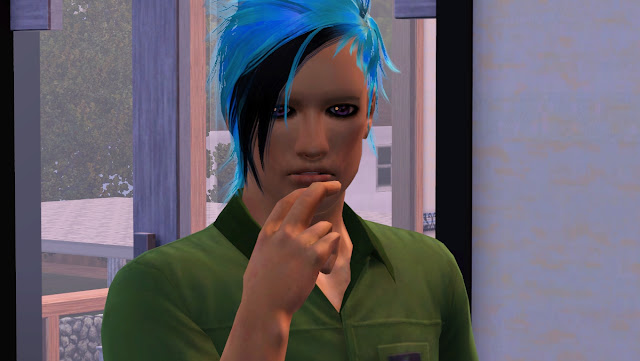 My face had healed from the beating I'd endured, but my mind still had a long way to go before it recovered. Even after spending about a month with Absolon in Verona's house, I was still unable to sleep because I had nightmares that I'd be taken back to The Compound and beaten again. I felt like I was living a dream and that I'd wake up to the alarm signaling that it was class time. I constantly felt like I didn't deserve to be free. I didn't know where that thought came from, especially since I had been taught that I was better than everyone else, but I was suffering from a sense of worthlessness. This particular morning I had put on one of Absolon's shirts because it comforted me. I had felt like I was a bother to him most days so I didn't actively try to ask him to hang out with me. 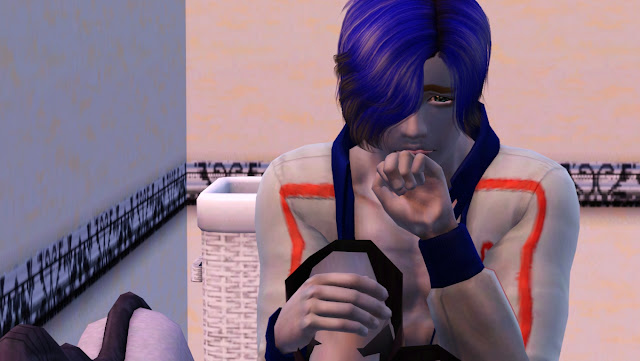 Absolon came over and sat with me on the couch, putting his arm around me. I loved seeing the concern in his gorgeous eyes, and the way he held me was always so gentle. I felt safe with him, and that was the pure truth. He was so patient with me, all the time, even when I had nightmares, or acted irrationally. Absolon would often suggest things for me to try, which I appreciated, but that feeling that I was a bother to him took a really long time to go away. 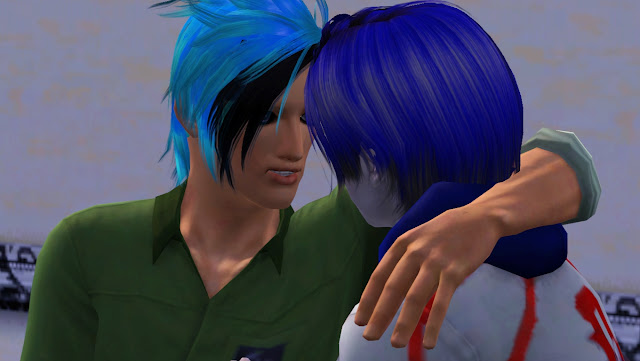 "You won't. Not unless you plan on slamming it into the ground with all your strength. Don't worry. If you don't like it, that's okay, I just thought maybe we could try to get you a hobby or something."

I nod at Absolon and he pulls out a guitar and hands it to me, looking into my eyes as he does it. He wraps my left hand around the neck of the guitar and places my right hand on the strings. I love his touch, it's always so gentle and his hands are so warm. 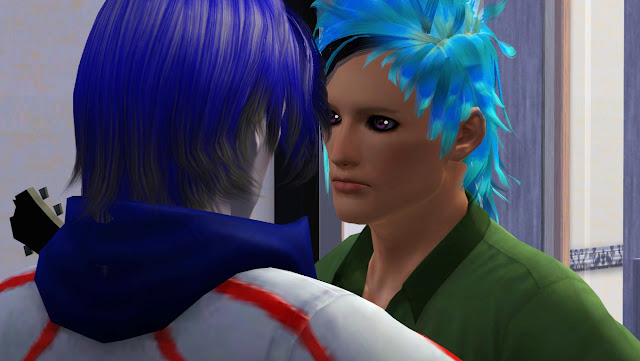 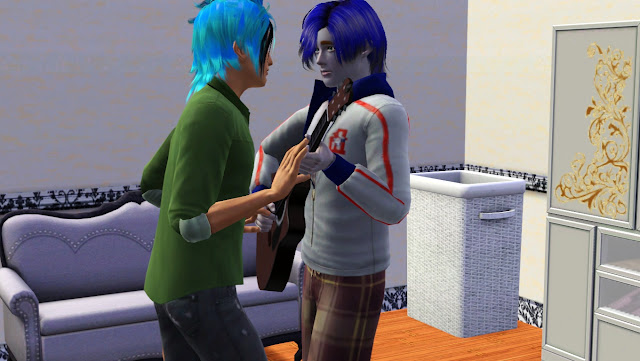 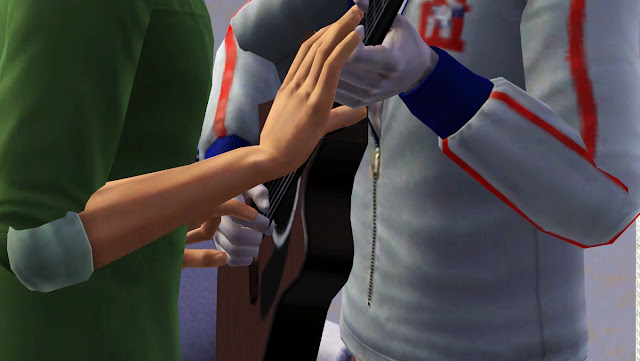 "Now, just strum a little bit. You don't have to worry about it sounding like a song, just get the feel of the strings on your fingers."

Even as I start strumming, Absolon keeps his finger on my hand, as if he doesn't want to let it go.

"The strings are really hard. Do you hurt yourself when you're playing for a long time?"

"Not really. I have a guitar pick for the strumming and I do get some callouses on my fingers, but it's not terrible or anything I can't stand. Now, with your left hand, press down on this string, and keep strumming, like this."

Absolon goes behind me and puts his hand around mine, while his other hand goes around my waist. I'm starting to feel like this morning is getting better than it had been. 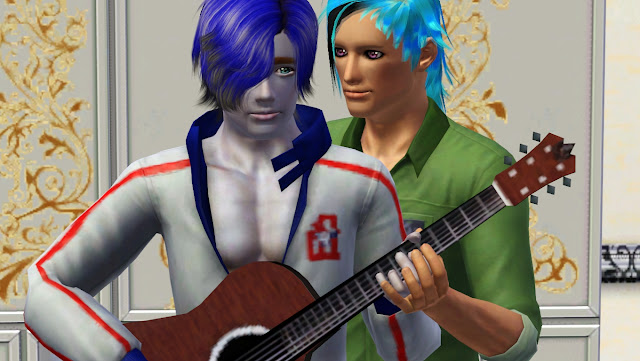 "Do you want me to play something? You can sit with me."

You can get addicted to a certain kind of sadness
Like resignation to the end, always the end
So when we found that we could not make sense
Well you said that we would still be friends
But I'll admit that I was glad it was over 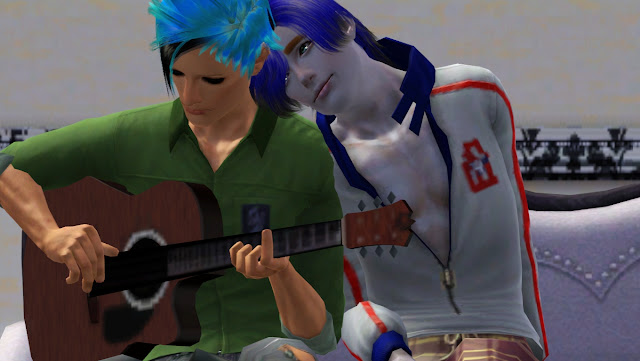 Somebody That I Used to Know - by Gotye

I couldn't believe how much my life changed over the next couple of months. I was living with people who actually cared about me and wanted to see me happy rather than control my every move. It was relieving not to worry about whether I was going to be tattled on, and even more exciting that I didn't have to walk on eggshells all the time. Eventually, the guilt that I had done something wrong by running away from The Compound wore off and I was able to see that I had made the best decision of my life. Pretty soon, I put The Compound behind me and they just became people that I used to know, except for Barry. 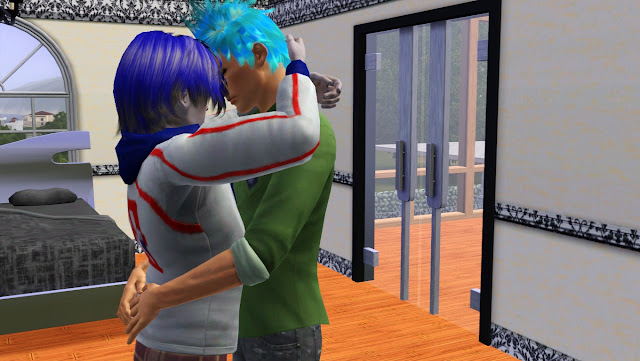 Barry was still fresh in my mind. The hate in his eyes when he pushed me against the bookcase that day and forced me to have sex with him still resonated at the front of my mind. I had nightmares that he would come find me and assault me again. It was putting me off from taking the next step in my relationship with Absolon, which was contradictory because I wanted nothing more than to be intimate with him. Absolon never pressured me thankfully, and I knew it was because he knew what I'd been through. There were many times I wanted to, especially any time I saw Absolon shirtless, but I always stopped myself. My whole life I had never had a good sexual experience, and I was fearful that it just meant I wasn't capable of enjoying it, that somehow I wasn't worth it. Deep down, I still felt like a piece of garbage that needed to be thrown away. 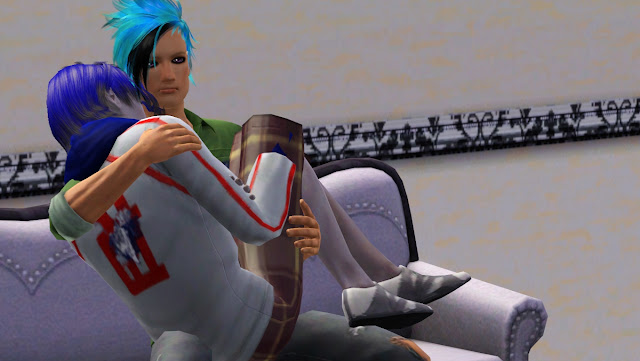 Have you gotten over those feelings of worthlessness since then, and how did you figure out your love life?

Yes, for the most part. Sometimes the feelings surface, but they don't linger for more than a day or two anymore. As for my love life, one day, I just couldn't take it anymore. I wanted to do more with Absolon than just kiss and hug him. I took a chance, and told him that I was scared, but that I really wanted it. He was hesitant at first because he didn't want to scare me, but he came up with an idea that worked perfectly. 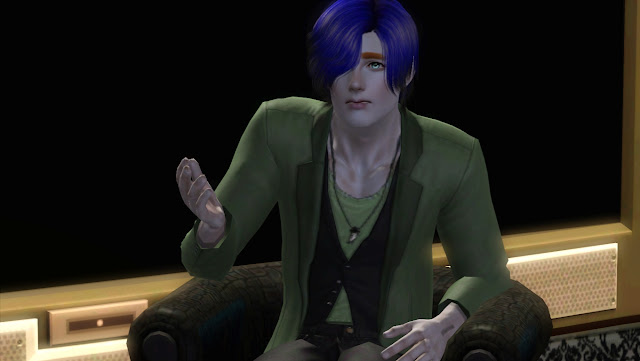 I was having one of my more confident days since the escape, and Absolon had just bent over to pick something up off the floor. All I could do was stare at him. His jeans were really tight and I wanted to see what he looked like without them. I'd had days like this before, where I wanted to kiss him and have it lead to something more, but I always stopped myself. In my head, I was giving myself a pep talk about why I didn't need to be afraid of my own boyfriend, who'd been nothing but gentle to me. I don't even know how long I was concentrating on the talk, but all of a sudden Absolon was standing in front of me. I made my way over to him and kissed him harder than I usually did. 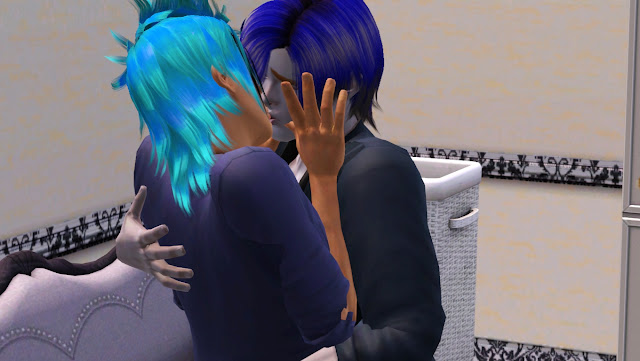 I was afraid I was going to chicken out again, but because I really didn't want to, I put my hands under Absolon's shirt, as a way to tell him that I really did want more.

Absolon smiled seductively at me and hugged me to his body. He didn't do anything more, even though I knew he was excited with what I was doing. I didn't blame him because I had told him how rough Barry was with me, and that I was terrified of being held and groped like that.

"Absolon, I want to... but I don't know how to prevent myself from stopping halfway through if something triggers the bad memories."

"What about this? What if you initiate everything? I won't do anything except what you tell me to."

What Absolon said was like music to my ears. I was so happy that I was going to get the chance to take the next step in our relationship without any fear that I would be hurt again. 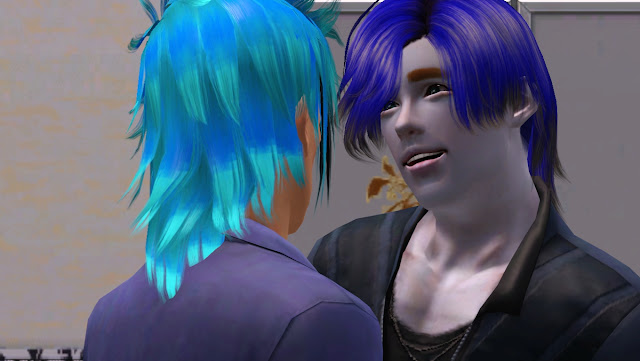 Now that I was given free reign to do whatever I wanted to Absolon, I knew the first thing I wanted was to see his chest, so I quickly unbuttoned his shirt. I continued making out with him ditching my clothing as I led him over to the bed, where I straddled him and rubbed his chest. 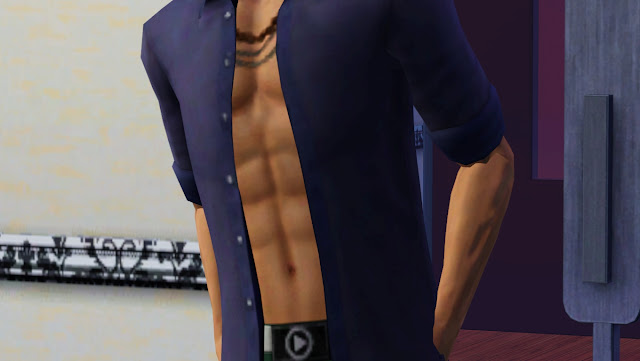 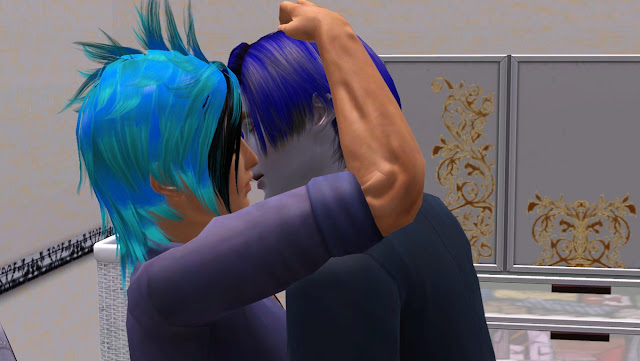 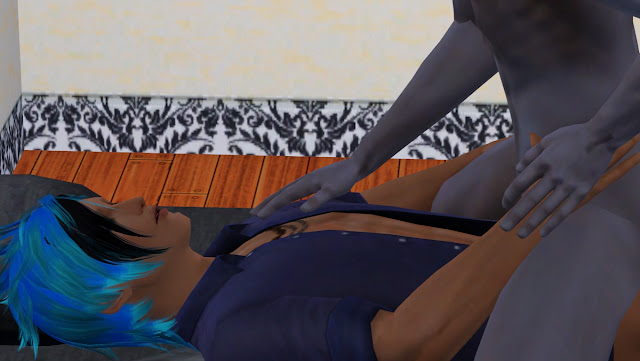 Once he was on the bed, I remembered how much I had wanted to see him without any pants on, so that was the next thing that fell to the floor. I looked at Absolon and he was smiling at me, obviously liking what I was doing. I climbed on the bed, leaning down to kiss Absolon. He put his arms around my neck and lifted his left leg to rest it on my hip. I looked into his eyes, smiling at him. 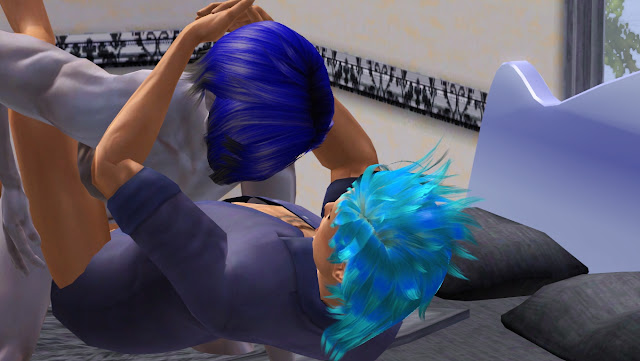 As we were making out, I felt Absolon against me and I wanted to show him how much I appreciated him. His breathing became more ragged and heavy as I held him in my mouth. I was feeling like I was ready for more so I slowly removed myself from him, and he let out a pleasure filled moan. He laid there with his eyes closed for a moment, but then he opened them and smiled at me. 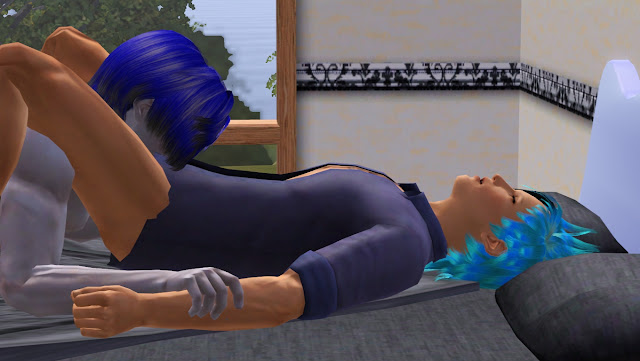 I wasn't sure what I wanted to do as far as positions went, so I just decided to go with the standard missionary position. I got on top of Absolon and put my hands on the bed. He looked at me with his gorgeous pink eyes and I kissed his mouth as I entered him. Absolon put his hands on my shoulders and continued his heavy breathing. I rocked my body back and forth on him, until I suddenly felt a build up of pressure that had happened the first time I was intimate with Abilene in the Intimacy Room, but this time it didn't feel forced. I didn't have to think about it feeling good, it just naturally did. 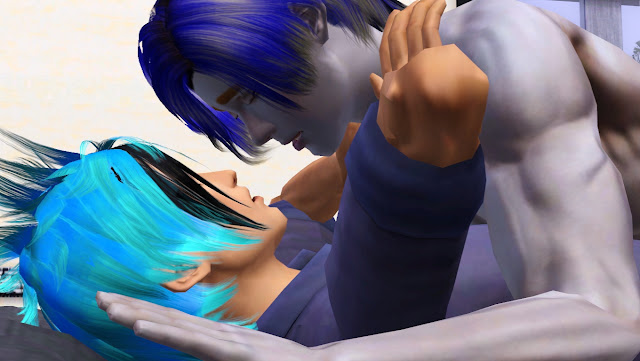 When the pressure relieved itself, I put my face next to Absolon's and kissed his cheek. He and I were both panting, and we laid there with our eyes closed for a few minutes.

"Thank you, Absolon, for not pressuring me."

"I wouldn't dream of it. Did you enjoy that?" 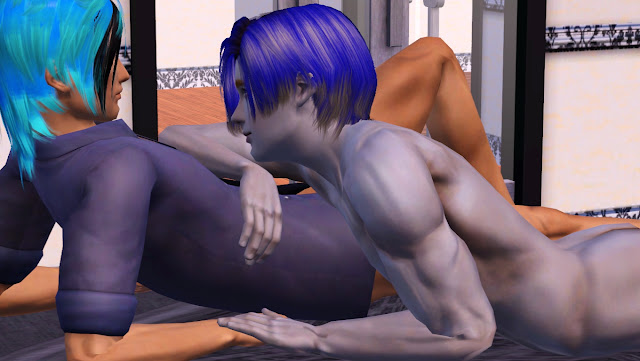 After that, any time we had sex, Absolon would let me do what I was comfortable with until I told him otherwise. It worked like a charm and I was eventually able to get over being raped. Barry no longer plagued my dreams, I realized I was capable of enjoying sex, and the best part of it was that I stopped feeling like a used piece of garbage.
Posted by LateKnightSimmer at 12:45 PM